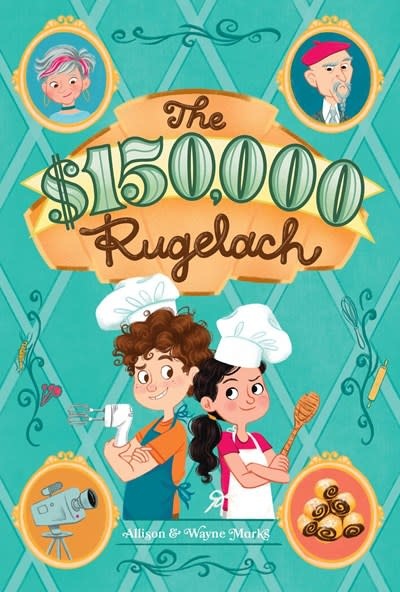 "This sweet story is a delightful, quick read with a wonderfully charming cast of characters. The delicious descriptions of baked goods are sure to make readers' mouths water; fortunately, three recipes are included. A refreshing and uplifting book filled with friendship, heartache, and a generous sprinkling of love." -- Kirkus Reviews

A delicious tale of rivalry, friendship, heartache, and dessert! Fame-obsessed Jack and somber Jillian, who is mourning the loss of her mother, become a mismatched duo selected to compete for $150,000 in a high-stakes baking contest jam-packed with hilarious high jinks.

Exploding with loud, rock 'n' roll attitude, eleven-year-old Jack Fineman dreams of becoming the greatest pastry chef who ever lived. His plans are thrown off course when his butterscotch basil brownies are upstaged at his sixth-grade holiday party by a simple plate of chocolate rugelach brought in by Jillian Mermelstein-the new girl at school whose mother has just died and who only wants to be left alone.

These budding bakers' lives are mixed together when they are selected to compete as teammates in a nationally televised competition. For Jack, this is his chance to advance one step closer to culinary greatness. For Jillian, it's an opportunity to help her father by winning her share of the $150,000 top prize.

Preparing to face bakers from the city's other middle schools, Jack and Jillian struggle to find the right recipe for working together. Along the way, they make the world's most irresistible oatmeal cricket cookies, battle Jack's checkered-pants-wearing brother for miniature golf supremacy, and discover the troubling reasons why each of them was chosen for the contest.

Allison and Wayne Marks met in a Canterbury Tales class at the University of Cincinnati, where they earned degrees in English literature. Allison, an avid urban gardener, and Wayne, a fiddler in local bands, are the authors of several books for young people, including the Bank Street Book Award Winner The Art Lesson: A Shavuot Story. They live in the Highland Square neighborhood of Akron, Ohio, and are the parents of twins, Claire and Elliott.

Ariel Landy is an illustrator and educator from New York City. Ariel began writing and illustrating stories as soon as she could hold a pencil and she never stopped. She currently lives in France with her husband and their dog, Sid. Learn more at ariellandyart.com