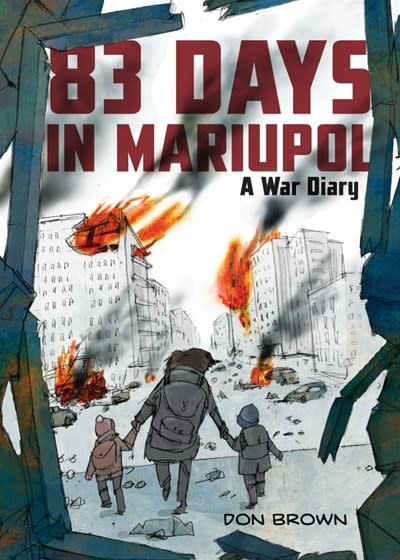 83 Days in Mariupol: A War Diary

A young adult graphic novel that will capture the complexities of the war in Ukraine, focusing on the siege of Mariupol (Feb–May 2022) and the brave people who stayed to defend their city against Russian forces as well as the resulting effects on global politics

A city ruined. In once quiet residential streets, two armies battle, driving people into cellars and basements with little food or water. No lights or heat. Dwindling medical supplies. Shells and bullets deliver cruel, random death to the young and old, men, women, and children. This is Mariupol, a Ukrainian city and early target of Russia’s invasion of Ukraine. Bordering Russian-occupied territory, the coastal city seemed doomed to a defeat that would come within days, if not hours. Could Mariupol, and Ukraine, survive? As Russian rockets threatened the city, Ukrainians resisted, and with a heroic combination of sacrifice and bravery, the besieged city endured . . . for months. But it all came at a steep cost.With compassion and his keen journalist’s eye, Sibert Honor creator Don Brown illuminates the horrors of Mariupol and the depredations of its people not seen in the city since World War II. He also shows that outside of Mariupol, the city’s agonies were mirrored by similar events occurring in towns and cities across Ukraine.83 Days in Mariupol reminds us that the bloody defiance shown at the Alamo, Dunkirk, Leningrad, and Thermopylae isn’t confined to the past but has a violent, modern presence. It is the story of senseless destruction, patriotism, and grit against long odds—a brutal battle whose consequences still reverberate across Ukraine and continue to reshape the global political landscape.

Don Brown is a YALSA Award for Excellence in Nonfiction winner and two-time Sibert Honor–winning creator of nonfiction teen graphic novels. Praised for his resonant storytelling and evocative, delicate watercolor paintings, Brown “has put the finishing touches on the standards for storyographies,” says School Library Journal. He lives in New York. Visit him at booksbybrown.com and on Instagram @donsart.