Home » A Child's Introduction to Hip-Hop 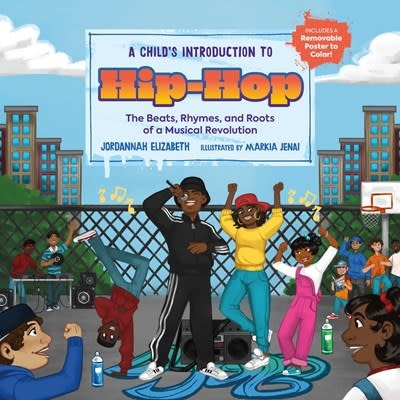 A Child's Introduction to Hip-Hop

In the 50 years since hip-hop was formally invented, the Bronx-based musical genre has evolved into a world-wide cultural phenomenon that has forever changed the shape of music. A Child’s Introduction to Hip-Hop will teach kids about the history of the genre, covering everyone from early heroes like The Sugar Hill Gang, Kurtis Blow, and Run D.M.C., to modern day titans like Kanye West, Cardi B, and Kendrick Lamar.

In the 1970s, a musical and cultural movement was sparked in the Bronx neighborhood of New York City. Led by three DJs who performed at local block parties, DJ Kool Herc, Afrika Bambaataa, and Grandmaster Flash become known as the “Holy Trinity” of hip-hop and they helped establish the four main pillars of the genre: deejaying, mc'ing, break dancing, and graffiti art.

From these early days, acclaimed journalist and music critic Jordannah Elizabeth takes kids on a journey through the history of hip-hop, helping young readers understand how and why it was invented, and how it evolved into a powerful platform that gave (and still gives) a voice to the often-ignored Black community in America. From Tupac Shakur and Ms. Lauryn Hill to Drake and Tyler the Creator, kids will celebrate some of hip-hop’s biggest names while learning about the roots of their musical sounds, and the community that propelled them into stardom.

Packed with modern, charming illustrations, including a pull-out poster for kids to color, A Child’s Introduction to Hip-Hop features age-appropriate descriptions of a musical genre that is changing the world and dominating the airwaves. This is the perfect book for young students who want to know more about the world of hip-hop and rap, as well as for parents who want to introduce their children to some of their favorite artists.

Jordannah Elizabeth is an author, music critic, editor, and lecturer. She is the author of She Raised Her Voice! and Astrology for Black Girls. She is a columnist at New York Amsterdam News and her work has appeared in Ms. Magazine, ZORA, Village Voice, LA Weekly, NPR Music, and many other publications. Jordannah has lectured and received invitations as a guest journalist from Harvard University, Pratt Institute, Maryland Institute College of Art, Columbia University, and De Montfort University in Leicester, England. She is a Baltimore native and enjoys reading, travel and spending time with her close friends and family.

Markia Jenai was raised in Detroit, during rough times, but she found her adventure through art and storytelling. She grew up listening to the old stories of her family members, which gave her an interest in history. Her love of art led her to study at the Academy of Art in San Francisco. An avid lover of fantasy settings, cultures, and mythology, Markia has made it her goal to create worlds where people of color are front and center. She lives in Detroit, Michigan.