Home » A Guest at the Feast: Essays 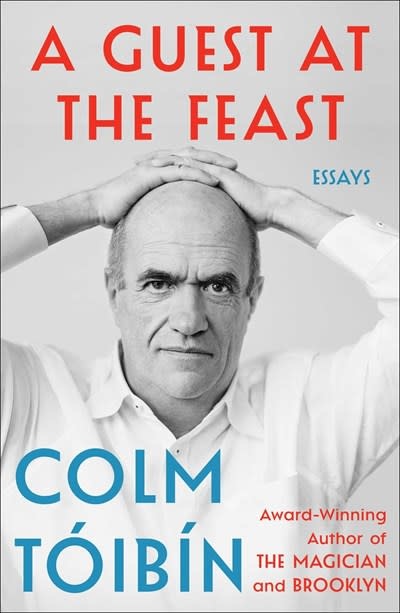 A Guest at the Feast: Essays

From one of the most engaging and brilliant writers of our time comes a collection of essays about growing up in Ireland during radical change; about cancer, priests, popes, homosexuality, and literature.

“IT ALL STARTED WITH MY BALLS.” So begins Colm Tóibín’s fabulously compelling essay, laced with humor, about his diagnosis and treatment for cancer. Tóibín survives, but he has entered, as he says, “the age of one ball.” The second essay in this seductive collection is a memoir about growing up in the 1950s and ’60s in the small town of Enniscorthy in County Wexford, the setting for many of Tóibín’s novels and stories, including Brooklyn, The Blackwater Lightship and Nora Webster. Tóibín describes his education by priests, several of whom were condemned years later for abuse. He writes about Irish history and literature, and about the long, tragic journey toward legal and social acceptance of homosexuality.

In Part Two, Tóibín profiles three complex and vexing popes—John Paul II, Benedict XVI and Francis. And in Part Three, he writes about a trio of authors who reckon with religion in their fiction. The final essay, “Alone in Venice,” is a gorgeous account of Toibin’s journey, at the height of the pandemic, to the beloved city where he has set some of his most dazzling scenes. The streets, canals, churches and museums were empty. He had them to himself, an experience both haunting and exhilarating.

A Guest at the Feast is both an intimate encounter with a supremely creative artist and a glorious celebration of writing.

Cancer: My Part in Its Downfall

A Guest at the Feast

A Brush with the Law

Colm Tóibín is the author of ten novels, including The Magician, winner of the Rathbones Folio Prize; The Master, winner of the Los Angeles Times Book Prize; Brooklyn, winner of the Costa Book Award; The Testament of Mary; and Nora Webster, as well as two story collections and several books of criticism. He is the Irene and Sidney B. Silverman Professor of the Humanities at Columbia University and has been named as the Laureate for Irish Fiction for 2022–2024 by the Arts Council of Ireland. Three times shortlisted for the Booker Prize, Tóibín lives in Dublin and New York.