Home » A Line to Kill 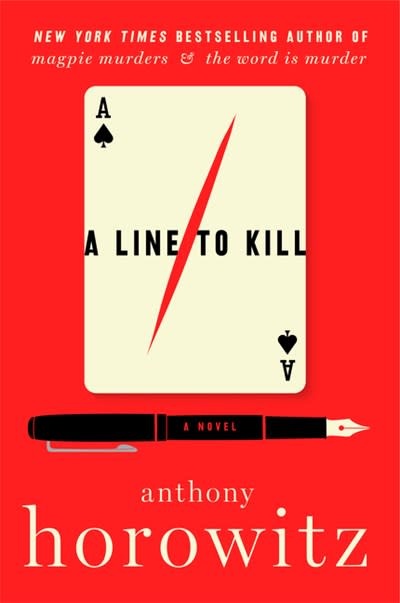 A Line to Kill

“Like any good mystery, Anthony Horowitz’s A Line to Kill has a gripping story, quirky characters who might be devious or might be innocent, a twisty plot, an enigmatic detective and a memorable setting. But it also has something else: sly humor, most of it at the expense of the author. . . . Horowitz (the real one) has a lot of fun with this book, dropping clues and red herrings, unraveling the story slowly, ending it—and then ending it again. Along the way he pokes fun at writers and readings and literary festivals and, most of all, at himself. Seriously, get in line for this one. It’s terrific.”—Star Tribune (Minneapolis)

When ex–detective inspector Daniel Hawthorne and his sidekick, author Anthony Horowitz, are invited to a far-from-exclusive literary festival on the tiny island of Alderney, they soon discover that all is not as it should be.The locals of Alderney are embroiled in a feud over a disruptive power line that’s turning neighbor against neighbor, and the festival’s other guests include an eccentric gathering of authors harboring a number of unpleasant secrets.So when a local grandee is found dead under the strangest of circumstances, Hawthorne and Horowitz know they don’t have to look far for suspects. There is no easy escape from the island, and it becomes horribly clear that a cold-blooded murderer lurks in their midst. But who? And there’s about to be a second murder. . . .A Line to Kill is a triumph—a hugely entertaining riddle of a story full of brilliant misdirection, beautifully set-out clues, and diabolically clever denouements.

Anthony Horowitz, one of the UK’s most prolific and successful writers, may have committed more (fictional) murders than any other living author. His novels include Moonflower Murders, Magpie Murders—currently being filmed for PBS and Britbox—Trigger Mortis, Moriarty, The House of Silk, The Word Is Murder, The Sentence Is Death, and the bestselling Alex Rider series for young adults. As a television screenwriter he created both Midsomer Murders and the BAFTA-winning Foyle’s War on PBS. He lives in London.