Home » A Seed in the Sun 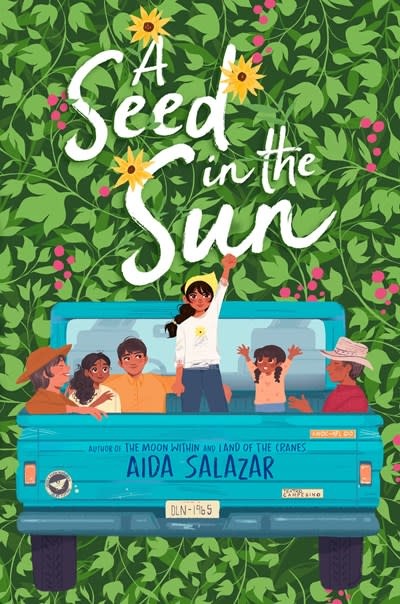 A Seed in the Sun

Reticent Lula Viramontes aches to one day become someone whom no one can ignore: a daring ringleader in a Mexican traveling carpa. But between working the grape harvest in Delano, California, with her older siblings under dangerous conditions; taking care of her younger siblings and Mamá, who has mysteriously fallen ill; and doing everything she can to avoid Papá’s volatile temper; it’s hard to hold on to those dreams. Then she meets activist Dolores Huerta and el Teatro Campesino (the official theater company of the United Farm Workers) and realizes she may need to raise her voice sooner rather than later. Because farm workers are striking for better treatment and wages, and whether Lula’s family joins them or not will determine their future—for better or worse.

Aida Salazar​ is an award-winning author and arts activist whose writings for adults and children explore issues of identity and social justice. She is the author of the critically acclaimed middle grade verse novels The Moon Within and Land of the Cranes, as well as the picture book anthology In the Spirit of a Dream: 13 Stories of American Immigrants of Color. Her forthcoming books include the middle grade anthology My New Gift: 16 Period Stories from BIPOC Authors (September 2022), the middle grade historical fiction A Seed in the Sun (October 2022), and the picture book biography Jovita Wore Pants: The Story of a Mexican Freedom Fighter (March 2023). Aida is a founding member of LAS MUSAS—a Latinx kidlit debut author collective. Her story, "By the Light of the Moon," was adapted into a ballet production by the Sonoma Conservatory of Dance and is the first Xicana-themed ballet in history. She lives with her family of artists in a teal house in Oakland, CA.