Home » A Song for the Unsung: Bayard Rustin, the Man Behind the 1963 March on Washington 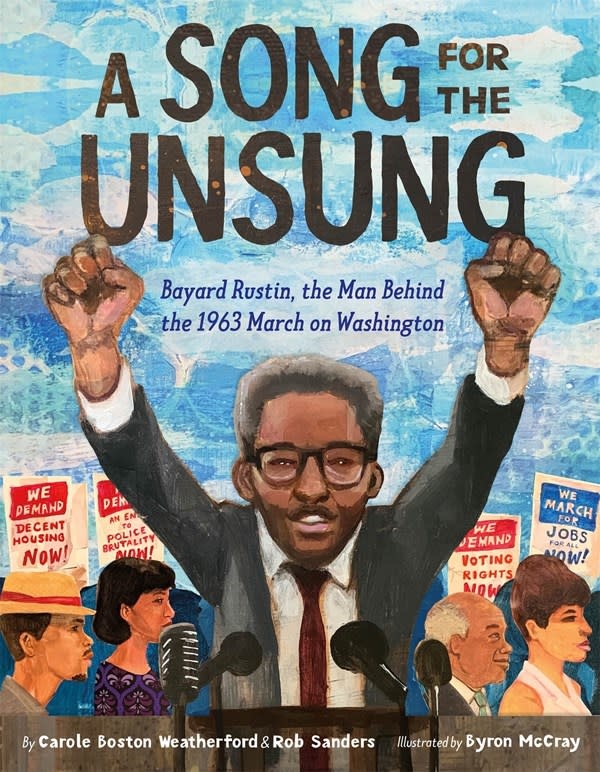 A Song for the Unsung: Bayard Rustin, the Man Behind the 1963 March on Washington

The author of Moses: When Harriet Tubman Led Her People to Freedom and the author of Pride: The Story of Harvey Milk and the Rainbow Flag combine their tremendous talents for a singular picture book biography of Bayard Rustin, the gay Black man behind the March on Washington of 1963.

On August 28, 1963, a quarter of a million activists and demonstrators from every corner of America convened for the March on Washington for Jobs and Freedom. It was there and then that they raised their voices in unison for racial and economic justice for all Black Americans, to call out inequities, and, ultimately, to advance the Civil Rights Movement.

Every movement has its unsung heroes. Individuals in the background who work without praise and accolades, who toil and struggle without notice. One of those unsung heroes was at the center of some of the most important decisions and events of the Civil Rights Movement.

Credited with introducing Dr. Martin Luther King, Jr. to the power of peaceful protest, for orchestrating the March on Washington, and for skillfully composing the program that placed Dr. King at the end of the list of speakers and musicians for what would become his historic “I Have a Dream” speech, this unsung hero will be celebrated for the first time in a picture book.

The unsung hero behind the movement was a quiet man. A gay, African American man. He was Bayard Rustin. On the heels of the sixtieth anniversary of this historic moment, two acclaimed picture book authors tell Bayard's inspiring story in an innovative and timeless book. A Song for the Unsung is the rousing story of one of our nation's greatest calls to action by honoring one of the men who made it happen.

Carole Boston Weatherford is the award-winning author of more than fifty books of poetry, nonfiction, and children's literature. She resides in North Carolina where she teaches at Fayetteville State University. She is the author of three Caldecott Honor Books, including Freedom in Congo Square; Voice of Freedom: Fannie Lou Hamer, Spirit of the Civil Rights Movement; and Moses: When Harriet Tubman Led Her People to Freedom.

Rob Sanders is an acclaimed writer who teaches, and a teacher who writes. He is the author of Cowboy Christmas, Crystal Kite-winner Outer Space Bedtime Race, Ruby Rose - Off to School She Goes, Ruby Rose - Big Bravos, Rodzilla, Pride: The Story of Harvey Milk and the Rainbow Flag, Peaceful Fights for Equal Rights, and Mayor Pete: The Story of Pete Buttigieg. Rob lives in Florida where he teaches elementary school.

Byron McCray is an artist, graphic designer, brand manager, and art director hailing from New York City. His clientele includes a diverse portfolio of corporate businesses and community-based organizations. A Song for the Unsung is his debut picture book as an illustrator.