Home » A Whale of the Wild 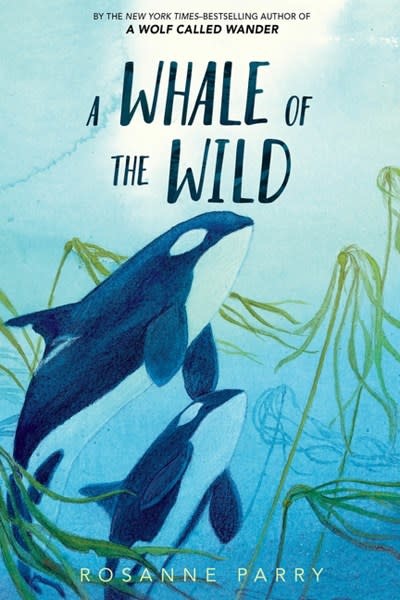 A Whale of the Wild

In the stand-alone companion to the New York Times–bestselling A Wolf Called Wander, a young orca whale must lead her brother on a tumultuous journey to be reunited with their pod. The New York Times calls A Whale of the Wild a “dreamily written, slyly educational, rousing maritime adventure.”

For Vega and her family, salmon is life. And Vega is learning to be a salmon finder, preparing for the day when she will be her family’s matriarch. But then she and her brother Deneb are separated from their pod when a devastating earthquake and tsunami render the seascape unrecognizable. Vega must use every skill she has to lead her brother back to their family. The young orcas face a shark attack, hunger, the deep ocean, and polluted waters on their journey. Will Vega become the leader she’s destined to be?A Whale of the Wild weaves a heart-stopping tale of survival with impeccable research on a delicate ecosystem and threats to marine life. Rosanne Parry’s fluid writing and Lindsay Moore’s stunning artwork bring the Salish Sea and its inhabitants to vivid life. An excellent read-aloud and read-alone, this companion to A Wolf Called Wander will captivate fans of The One and Only Ivan and Lynne Kelly’s Song for a Whale.Includes a map and extensive backmatter.

Rosanne Parry is the author of the acclaimed novels A Wolf Called Wander, Heart of a Shepherd, Second Fiddle, and Written in Stone. She has taught writing at schools, conferences, educational nonprofits, and online at the Loft Literary Center. She and her family live in an old farmhouse in Portland, Oregon. She writes in a tree house in her backyard.Lindsay Moore is an artist and writer with roots in Northern Michigan. Her first book, Sea Bear, received three starred reviews. She studied marine biology and fine art at Southampton College on Long Island and figure drawing at the Art Students League in New York City. She earned her master of science in medical and scientific illustration from Medical College of Georgia (now part of Augusta University) and has received recognition for her work from both the Association of Medical Illustrators and the Australian Institute of Medical and Biological Illustration. She lives in Bowling Green, Ohio.