Home » A Young People's History of the United States 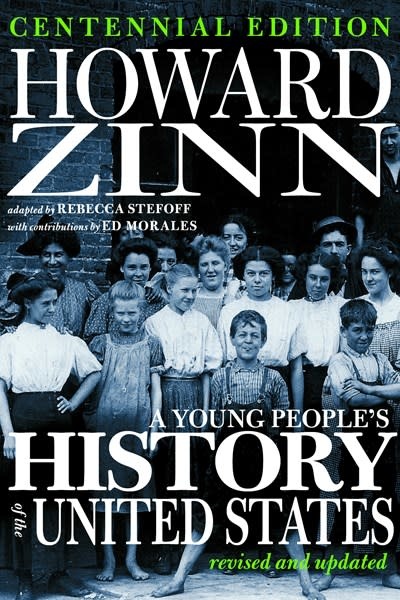 A Young People's History of the United States

The seminal American history book for middle grade and high school readers, now revised and updated for the centennial of Howard Zinn's birth.

“A brilliant and moving history of the American people from the point of view of those who have been exploited … the book is an excellent antidote to establishment history.” – Library Journal

With new contributions by Latinx scholar Ed Morales and adapter Rebecca Stefoff based on newly available scholarship, here is a new and revised edition of Howard Zinn's seminal text, A Young People's History of the United States. A new chapter, introduction, conclusion and further updates throughout the book expand our understanding of Latinx history in the US through the political movements and cultural contributions of Latino Americans, as well as expanded coverage of Native history and Asian American activism.

This now-classic work of radical and activist US history gives readers the viewpoints of workers, slaves, immigrants, women, Native Americans, and others whose stories, and their impact, are rarely included in books for young people. Beginning with a look at Christopher Columbus's arrival through the eyes of the Arawak Indians, then leading the reader through the struggles for worker's rights, women's rights, and civil rights during the nineteenth and twentieth centuries, and ending with the recent protests against continued American imperialism, Howard Zinn presents a radical new way of understanding America's history. In so doing, he reminds readers that America’s true greatness is shaped by our dissident voices, not our military generals.

REBECCA STEFOFF has devoted her career to writing nonfiction books for young readers including histories, literary biographies, and landmark works of science, including Howard Zinn's A People's History of the United States, Jared Diamond's The Third Chimpanzee, Charles C. Mann's bestselling 1493, and Ronald Takaki's A Different Mirror: A History of Multicultural America.

ED MORALES is a journalist, poet, and the author of several books including Latinx: The New Force in Politics and Culture and Fantasy Island: Colonialism, Exploitation, and the Betrayal of Puerto Rico. He is a lecturer at Columbia University’s Center for the Study of Ethnicity and Race and at the CUNY Graduate School of Journalism.