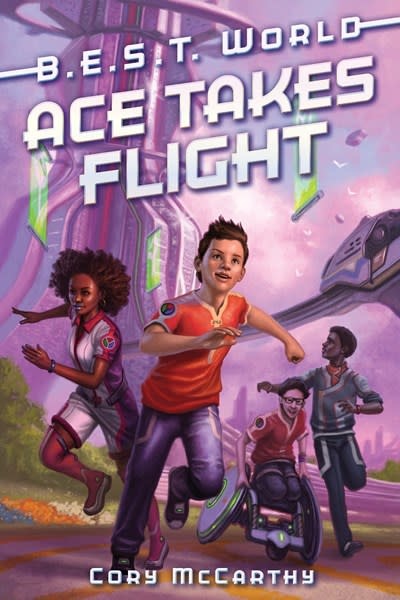 Welcome to 2048. Every graduate of the B.E.S.T.  Program can receive a bionic enhancement as a rite of passage. For Ace Wells, it is just the beginning of his epic augmentation journey in book one of this near-future sci-fi trilogy.

Eleven-year-old Ace Wells’s dream has finally come true: he is a new cadet in the B.E.S.T. (Biological Enhancement Systems Technology) Program. Until now, he’s been living in the shadow of his superstar brother, Finn—but not for long.

This is new Ace! He knows he can make his mark on the world with SuperSoar wings, but on day one, nothing goes as planned. The antagonistic elevator AI Otis, wants to eat his belongings, the physical feats set by his tough-nut coach are impossible, and his celebrity roommates are far from welcoming.

It becomes crystal clear that Ace is not prepared to fly—in any sense of the word.

As tensions build, Ace has a sinking suspicion that there's something more going on at B.E.S.T. than meets the eye. Will he ever make it to graduation and get the aug of his dreams? Join Ace and find out as he tests his strength and grit in this page-turning middle grade adventure!

Cory McCarthy [they/he] is the acclaimed, bestselling author of five released children's books and just as many forthcoming titles. Their books have been translated into several languages and have appeared on the Bank Street, Barnes and Noble, Book Riot, and Tor best books list, as well the Amelia Bloomer list of feminist children's fiction. Their upcoming titles include a middle grade trilogy and nonfiction picture book. They teach at Vermont College of Fine Arts and, like many of their characters, are a member of the LGBTQ+ community.