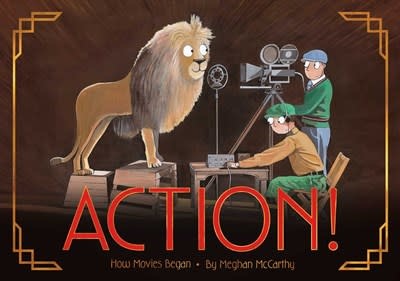 Award-winning nonfiction picture book creator Meghan McCarthy tells the story of how motion pictures came to be invented and the story of the many people who helped create them.

Movies take us on adventures, introduce us to new worlds, and make us feel, but how did they start?

In her trademark easy-to-follow narrative voice, this fact-filled picture book tells the story of the evolution of movies and the people who worked hard to create them—both on-screen and behind the scenes. In fascinating detail, she shows how early photography capturing motion became silent films, which led to the first color films and how those building blocks allowed for the inspiring movies of today.

Meghan McCarthy is the award-winning author and illustrator of many books for children, including Earmuffs for Everyone!: How Chester Greenwood Became Known as the Inventor of Earmuffs; Daredevil: The Daring Life of Betty Skelton; Pop!: The Invention of Bubble Gum; City Hawk: The Story of Pale Male; Seabiscuit the Wonder Horse; All That Trash; and Action! A graduate of the Rhode Island School of Design, she lives in Brooklyn, New York. Visit her at Meghan-McCarthy.com.