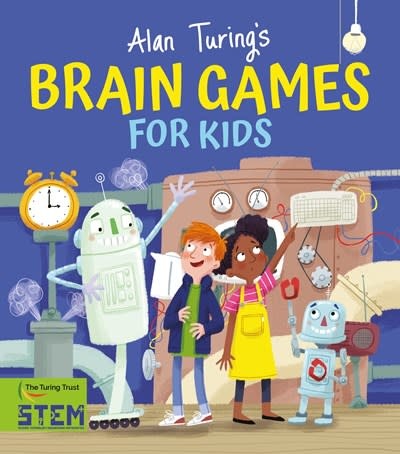 Young puzzlers can follow in the footsteps of WWII hero and computer genius Alan Turing and test their codebreaking skills with this brain-boosting book.

Published in association with the Turing Trust, this fun-packed, full-color collection of logic puzzles has been specially designed to intrigue, challenge, and inspire young readers. The puzzles will test language, visual and spatial awareness, memory, attention and reasoning as they crack these mind-bending conundrums.

Sales of this book support the work of The Turing Trust, the charity set up by Alan's family in his memory to provide much-needed computers to schools in Africa, thereby celebrating his legacy in computer development.

Guaranteed to provide hours of entertainment for children aged 7+.

William Potter is a prolific author of children's non-fiction. He has also written and edited a wide range of well-known comics and magazines, such as Teenage Mutant Ninja Turtles, Sonic the Comic, Marvel Fact Files, Marvel Chess Specials and DC Chess Collection. He lives in Haslemere, UK.

Gareth Conway graduated from The Surrey Institute of Art and Design with a degree in animation. He has worked on several successful children's animated television as well as illustrating books. Gareth lives in Devon with his wife and daughter who are his biggest inspiration and harshest critics in equal measure.