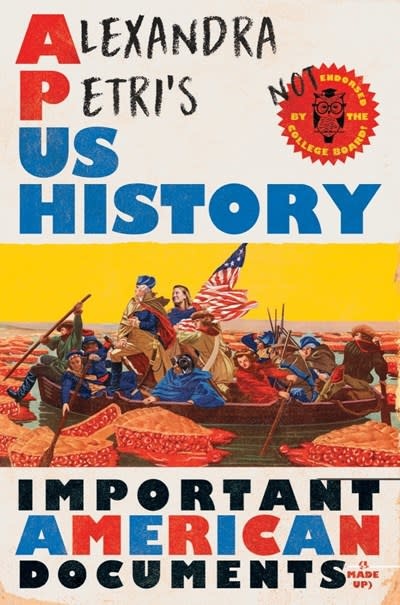 If you’re going to lie about the past, you might as well make up lies that are fun!

Washington Post humor columnist Alexandra Petri is perhaps America’s most beloved political satirist. Her new, side-splitting work of historical humor uses imagined documents to create a laugh-out-loud, irreverent takedown of our nation’s complicated past.From the Spanish conquistadors to the Salem witch trials, from Paul Revere’s ride to the exclamation mark in Oklahoma!, Alexandra Petri’s U.S. History presents a deranged timeline in which John and Abigail Adams try sexting, the March sisters from Little Women are sixty feet tall, Nicola Tesla’s friends stage an intervention when he falls in love with a pigeon, and Susan Sontag goes to summer camp. A witty, absurdist satire of the last 500 years, Petri’s “historical fan fiction” shows why she has been hailed as “genius,”* a “national treasure,”** and “one of the funniest writers alive.”***

Alexandra Petri is a humorist and columnist for the Washington Post and author of Nothing Is Wrong and Here Is Why, a Thurber Prize finalist. Her satire has also appeared in McSweeney's and the New Yorker's Daily Shouts and Murmurs. She lives in Washington, DC.