Home » All In: An Autobiography 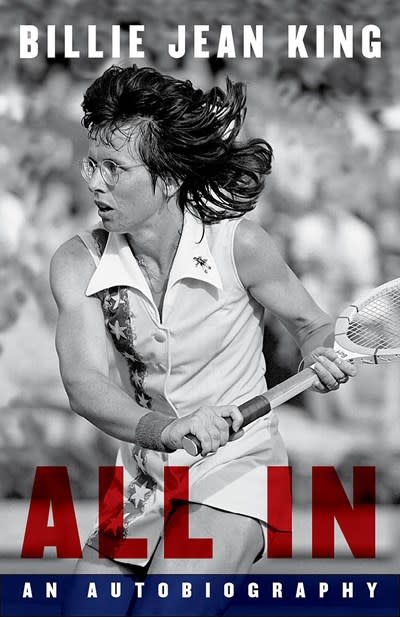 All In: An Autobiography

An inspiring and intimate self-portrait of the champion of equality that encompasses her brilliant tennis career, unwavering activism, and an ongoing commitment to fairness and social justice.

In this spirited account, Billie Jean King details her life’s journey to find her true self. She recounts her groundbreaking tennis career—six years as the top-ranked woman in the world, twenty Wimbledon championships, thirty-nine grand-slam titles, and her watershed defeat of Bobby Riggs in the famous “Battle of the Sexes.” She poignantly recalls the cultural backdrop of those years and the profound impact on her worldview from the women’s movement, the assassinations and anti-war protests of the 1960s, the civil rights movement, and, eventually, the LGBTQ+ rights movement.

She describes the myriad challenges she’s hurdled—entrenched sexism, an eating disorder, near financial peril after being outed—on her path to publicly and unequivocally acknowledging her sexual identity at the age of fifty-one. And she talks about how her life today remains one of indefatigable service. She offers insights and advice on leadership, business, activism, sports, politics, marriage equality, parenting, sexuality, and love. She shows how living honestly and openly has had a transformative effect on her relationships and happiness. Hers is the story of a pathbreaking feminist, a world-class athlete, and an indomitable spirit whose impact has transcended even her spectacular achievements in sports.

BILLIE JEAN KING is the first female athlete to receive the Presidential Medal of Freedom. She is the founder of the Billie Jean King Leadership Initiative, the Women’s Tennis Association, and the Women’s Sports Foundation; she co-founded World Team Tennis; and she is part of the ownership group of the Los Angeles Dodgers. In 2006, the National Tennis Center was renamed the USTA Billie Jean King National Tennis Center. In 2020, the Fed Cup was renamed the Billie Jean King Cup, making it the first global team sports competition named for a woman. She was one of Life magazine’s “100 Most Important Americans of the 20th Century,” and in 2018 she received a Lifetime Achievement Award as part of the BBC Sports Personality of the Year Awards. She is an Adidas Global Ambassador, a past member of the board of the Elton John AIDS Foundation, and a past member of the President’s Council on Fitness, Sports and Nutrition. She lives in New York.