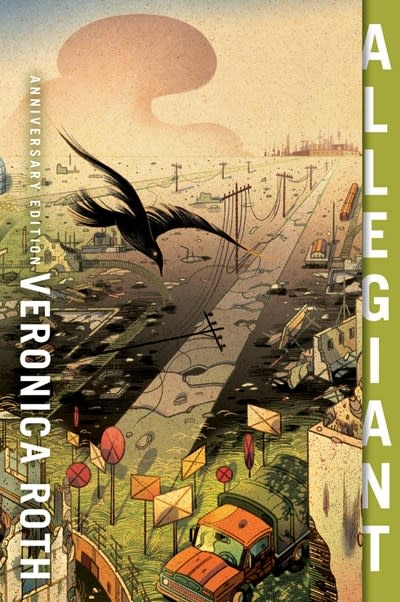 Celebrate the 10th anniversary of Divergent, with this special edition of Allegiant, the third book in the #1 New York Times bestselling series that captured the hearts of millions of readers and inspired a series of major motion pictures starring Shailene Woodley. This edition features exclusive content from Veronica Roth and beautiful, reimagined cover art from award-winning illustrator Victo Ngai.

Told from a riveting dual perspective, this third installment in the series follows Tris and Tobias as they battle to comprehend the complexities of human nature—and their selves—while facing impossible choices of courage, allegiance, sacrifice, and love. The explosive conclusion to Veronica Roth's #1 New York Times bestselling Divergent trilogy reveals the secrets of the dystopian world that captivated readers in Divergent and Insurgent.“Tragic, shocking, and thematically consistent [but] offers a poignant hope. The story provides a thought-provoking metaphor for crucial conflicts of adolescence.” —Kirkus Reviews“Intelligent and complex. This final installment will capture and hold attention until the divisive final battle has been waged.” —Publishers WeeklyEXCLUSIVE EXTRASIn-depth Q&A with Veronica Roth about the characters of Caleb, Johanna, the Amity faction, and the Factionless.

Veronica Roth is the #1 New York Times bestselling author of Divergent, Insurgent, Allegiant, Four: A Divergent Collection, Carve the Mark, The Fates Divide, and The End and Other Beginnings. Ms. Roth and her husband live in Chicago. You can visit her online at www.veronicarothbooks.com.