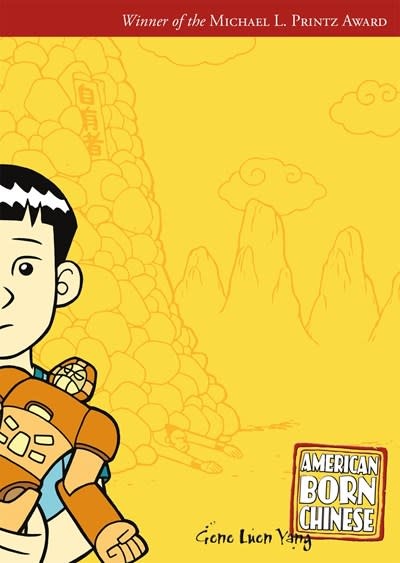 American Born Chinese, a Printz Award winner and a New York Times bestseller, is coming to you in a paperback edition with a new afterword from the author.

A tour-de-force by New York Times bestselling graphic novelist Gene Yang, American Born Chinese tells the story of three apparently unrelated characters: Jin Wang, who moves to a new neighborhood with his family only to discover that he's the only Chinese-American student at his new school; the powerful Monkey King, subject of one of the oldest and greatest Chinese fables; and Chin-Kee, a personification of the ultimate negative Chinese stereotype, who is ruining his cousin Danny's life with his yearly visits. Their lives and stories come together with an unexpected twist in this action-packed modern fable. American Born Chinese is an amazing ride, all the way up to the astonishing climax.

Gene Luen Yang writes, and sometimes draws, comic books and graphic novels. American Born Chinese, his first graphic novel from First Second, was a winner of the Printz Award. His two-volume graphic novel Boxers & Saints won the LA Times Book Prize. His other works include Secret Coders (with Mike Holmes), The Shadow Hero (with Sonny Liew), New Super-Man from DC Comics (with various artists), and the Avatar: The Last Airbender series from Dark Horse Comics (with Gurihiru). He was the fifth National Ambassador for Young People’s Literature an in 2016 he was named a MacArthur Foundation Fellow.