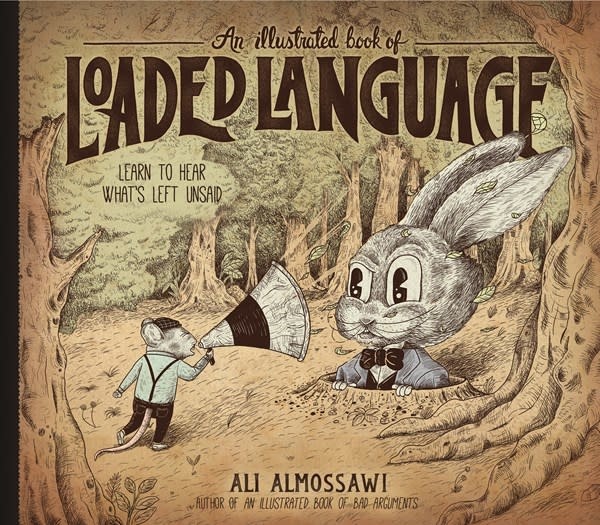 The author and illustrator of backlist juggernaut An Illustrated Book of Bad Arguments (140,000 in print) return at last with a desperately timely guide to rhetoric (hidden and not-so-hidden “slant” in speech and writing)—irresistibly explained with furry animals!

Tens of thousands of demonstrators packed the city’s streets on Friday. The actual count was 250,000. Why tens of thousands, then, and not a quarter million?

The grocer takes woke orders on its brands from a 17-year-old. The nameless 17-year-old’s opinion seems not worth considering. At what age will it be?

Rabbits zapped three badgers in an ambush last night, hours after six rabbits in a neighboring town lost their lives. Were the six rabbits the sole participants in losing their own lives? Those silly rabbits . . .

In this adorably illustrated book, old Mr. Rabbit is your guide to these and many more examples of loaded language. He mines real reporting (by respected and rogue media alike) to unmask rhetoric that shifts blame, erases responsibility, dog-whistles, plays on fear, or rewrites history—subtly or shamelessly. It takes a long pair of ears to hear what’s left unsaid—but when the very notion of truth is at stake, listening for “spin” makes all the difference.

Ali Almossawi is an alumnus of MIT's engineering systems division and Carnegie Mellon's school of computer science. His books include An Illustrated Book of Bad Arguments, An Illustrated Book of Loaded Language, and Bad Choices. His writing has appeared in publications such as Wired. He works and lives in San Francisco.Alejandro Giraldo holds a degree in graphic design from UPB Medellín and a master's in art direction from ELISAVA (the Barcelona School of Design and Engineering). He runs the clothing company Velmost and works as a freelance illustrator. He lives in Medellín, Colombia.