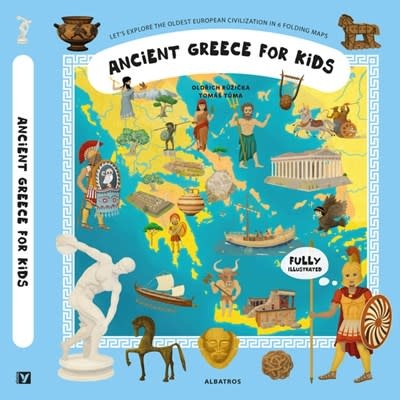 Greece, the cradle of Western Civilization, depicted in a novelty format like never before.

Thousands of years ago, the first tribes arrived in the Balkan Peninsula, laying the foundations of Europe’s oldest civilization: Greece, which gave the world democracy, as well as endless knowledge of mathematics, architecture, military affairs, and philosophy. Modern scientists can all trace their lineage back to Greek mathematicians and philosophers, and modern Greece is littered with the remnants of beautiful temples and ancient buildings that shaped the taste and style of modern architects. Let’s travel far into the past and take a look at how the Ancient Greeks lived, worked, fought, and created art.

Oldrich Ruzicka studied at Faculty of Education and worked as teacher for a few years. Before he decided to found his own publishing house, he worked many years as a chief-editor and publisher of a big Czech publishing house. Later his publishing house became a part of Albatros Media. He is highly successful author of children’s literature whose books have been translated into many languages.

Tomas Tuma studied English and Art Education. Currently he is a freelance illustrator, photographer and programmer. He as an author of educational adventure books for children, where he can popularize modern technologies. He likes walking in the woods.