Home » Ander and Santi Were Here 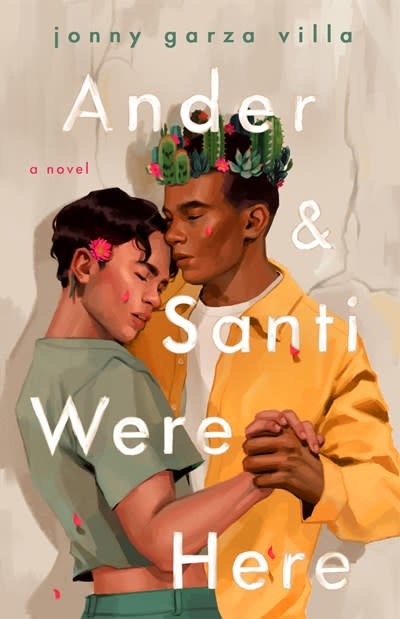 Ander and Santi Were Here

Aristotle and Dante meets The Sun is Also a Star in this YA contemporary love story about a nonbinary Mexican American teen falling for the shy new waiter at their family’s taqueria.

The Santos Vista neighborhood of San Antonio, TX is all Ander Lopez has ever known. The smell of pan dulce, the laughter of kids hitting a piñata at the park, the mixture of Spanish and English filling the streets. And, especially, their job at the family’s taqueria. So as the days count down on their gap year until the day they’ll leave for art school in Chicago, their head is filled with one relentless question: am I really ready to leave it all behind?

Their family, however, has the opposite worry: to keep them from becoming complacent, they “fire” Ander so they can focus on their murals and prepare for college. That is, until they meet Santiago Garcia, the hot new waiter. Ander is immediately crushing and slides back into a few shifts, desperate to spend more time with him. A couple nights closing down the restaurant together; late night drives to drop Santi off after work; falling for each other is as natural as breathing. Through Santi’s eyes, Ander finally understands everything they are and want to be as an artist, and Ander becomes Santi’s first step toward making Santos Vista and the U.S. feel like home.

But they start to realize how fragile that sense of home is when vans are spotted following Santi on his walks to work. When ICE agents are waiting for them at Ander’s house. When they begin to feel like the entire world is against them. And when, eventually, the outside world starts to win.

JONNY GARZA VILLA (they/them) is an author of contemporary young adult literature with characters and settings inspired by their own Tejane, Chicane, and queer identities. Their debut YA novel Fifteen Hundred Miles from the Sun was a Pura Belpré Honor Book and a Kirkus Best YA Fiction of 2021 selection. When not writing, Jonny enjoys reading, playing Dungeon and Dragons, visiting taquerías, listening to Selena, and caring for their many cacti children. They live in San Antonio.