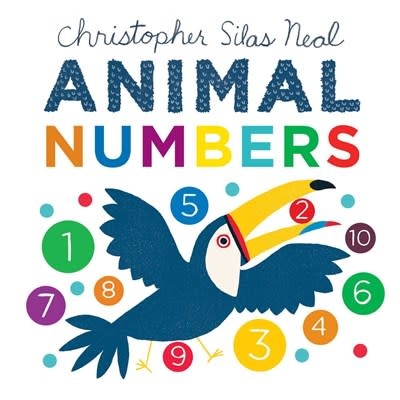 Animal Numbers humorously mashes up numbers and animals to create silly, wonderful creatures. Kids will love these hilarious combinations as they learn both animal names and counting!

When a loud dinosaur meets number four, they become a . . .

Best-selling picture book creator Christopher Silas Neal is back with more hilarious board books. A follow up to Animal Colors and Animal Shapes, Animal Numbers mashes up animals and numbers to create unique and funny made-up creatures with silly attributes! Dinosaurs with four heads, a two-can with two beaks, kids will delight as they learn both animals and numbers at the same time.

Christopher Silas Neal is an illustrator and designer who has published numerous celebrated picture books. He is the illustrator of Up in the Garden and Down in the Dirt (Chronicle Books) as well as Over and Under the Snow (Chronicle Books), which won the E.B. White Read Aloud Award Honor and the Golden Kite Award for Picture Book Text. Neal lives in Brooklyn, New York.