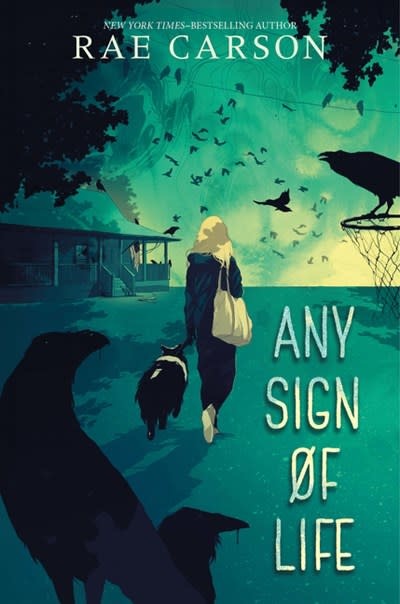 New York Times–bestselling author Rae Carson delivers a harrowing and pulse-pounding survival story set in the near-future Midwest—with a cosmic twist. When a teenage girl thinks she may be the only person left alive in her town—maybe in the whole world—she must rely on hope, trust, and her own resilience.In a starred review, Publishers Weekly called Any Sign of Life a “timely update to classic postapocalyptic YA.” A must-have for readers of Rick Yancey’s The 5th Wave and Neal Shusterman and Jarrod Shusterman’s Dry.

Paige Miller is determined to take her basketball team to the state championship, maybe even beyond. But as March Madness heats up, Paige falls deathly ill. Days later, she wakes up attached to an IV and learns that the whole world has perished. Everyone she loves, and all of her dreams for the future—they’re gone.But Paige is a warrior, so she pushes through her fear and her grief. And as she gets through each day—scrounging for food, for shelter, for safety—Paige encounters a few more young survivors. Together, they might stand a chance. But as they struggle to endure their new reality, they learn that the apocalypse did not happen by accident. And that there are worse things than being alone.New York Times–bestselling author Rae Carson tells a contemporary and all-too-realistic story about surviving against the odds. The award-winning author brings the vivid world-building, memorable characters, and extraordinary writing she is known for to this near-future thriller. With page-turning suspense, a light sci-fi twist, and an emotional focus on the resolute qualities of the human spirit, Any Sign of Life will electrify fans of Rory Power’s Wilder Girls and Emily St. John Mandel’s Station Eleven.

Rae Carson is the author of the acclaimed and bestselling Girl of Fire and Thorns series, The Empire of Dreams, and the award-winning Gold Seer Trilogy. The Girl of Fire and Thorns was named a Morris YA Debut Award finalist, an Andre Norton Award finalist, and a YALSA Top Ten Best Fiction for Teens Pick. Walk on Earth a Stranger was named to the 2015 National Book Award Longlist, and won the Western Writers of America Spur Award, among other honors. She is also the author of Star Wars: The Rise of the Skywalker and Star Wars: Most Wanted. Rae Carson lives in Ohio with her husband.