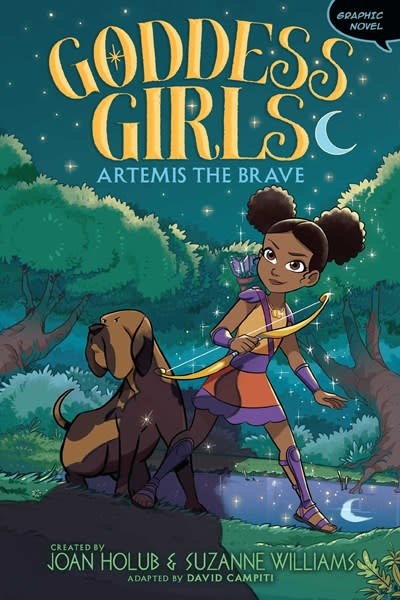 Artemis finds her courage in this fourth book in the Goddess Girls Graphic Novel series, based on the popular Goddess Girls series.

Everyone sees Artemis, goddess of the hunt, as the bravest goddess girl at Mount Olympus Academy. What her classmates and best friends don’t realize is that sometimes she isn’t as courageous as she seems. And, when Orion—a foreign exchange student from Earth—enters the picture, she is even more nervous than usual! Can Artemis prove to her friends, and herself, that she can live up to her name?

Joan Holub has authored and/or illustrated over 140 children’s books, including the Goddess Girls series, the Heroes in Training series, the New York Times bestselling picture book Mighty Dads (illustrated by James Dean), and Little Red Writing (illustrated by Melissa Sweet). She lives in North Carolina and is online at JoanHolub.com.

Suzanne Williams is a former elementary school librarian and the author of over seventy books for children, including the award-winning picture books Library Lil (illustrated by Steven Kellogg) and My Dog Never Says Please (illustrated by Tedd Arnold), and several chapter book and middle grade series. She also coauthors the Goddess Girls and Thunder Girls series with the fantastic Joan Holub. Visit her at Suzanne-Williams.com.

David Campiti is an animation producer and voiceover actor and is CEO of Glass House Graphics/Cutting Edge Animation & Publishing Services. His talent team has worked on such features as Despicable Me, Rio, Gnomeo & Juliet, and Horton Hears a Who—and fully produced Niko: The Journey to Magika and El Americano.