Home » Pandava 03 Aru Shah and the Tree of Wishes 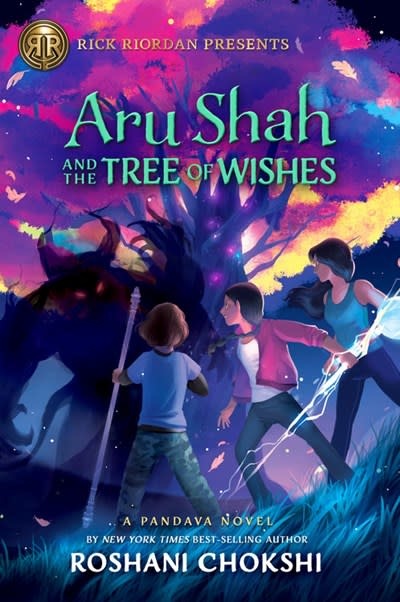 Pandava 03 Aru Shah and the Tree of Wishes

War between the devas and the demons is imminent, and the Otherworld is on high alert. Fourteen-year-old Aru Shah and her friends are sent on a mission to rescue two "targets," one of whom is about to utter a prophecy that could mean the difference between victory and defeat. Turns out the targets, a pair of twins, are the newest Pandava sisters, though the prophecy says that one sister is not true.

When the Pandavas fail to prevent the prophecy from reaching the Sleeper's ears, the heavenly attendants ask them to step aside. Aru believes that the only way to put the shine back on their brand is to find the Kalpavriksha, the wish-granting tree that came out of the Ocean of Milk when it was churned. If she can reach it before the Sleeper, perhaps she can turn everything around with one wish.

Praise for the Pandava Series:*"Chokshi seamlessly weaves Indian cosmology and pop culture into a refreshingly feminist plot laced with witty dialogue. The most compelling feature of the novel, however, is the complexity of its characters, who, despite their divinity or semidivinity, are at their core very human. This will leave fans enthralled and clamoring for more."--Kirkus Reviews (starred review)

Look for these other fan favorites from Rick Riordan Presents:The Storm Runner by J.C. CervantesDragon Pearl by Yoon Ha LeeSal and Gabi Break the Universe by Carlos HernandezRace to the Sun by Rebecca RoanhorseTristan Strong Punches a Hole in the Sky by Kwame Mbalia

Author Bio: Roshani Chokshi (www.roshanichokshi.com) is the author of the instant New York Times best-selling first two books in the Pandava series, Aru Shah and the End of Time and Aru Shah and the Song of Death. She also wrote the New York Times best-selling YA books The Star-Touched Queen and The Gilded Wolves. She studied fairy tales in college, and once had a pet luck dragon that looked suspiciously like a Great Pyrenees dog. The Pandava novels were inspired by the stories her grandmother told her as well as Roshani's all-consuming love for Sailor Moon. She lives in the south and says "y'all," but she doesn't really have a Southern accent. Her Twitter handle is @roshani_chokshi.