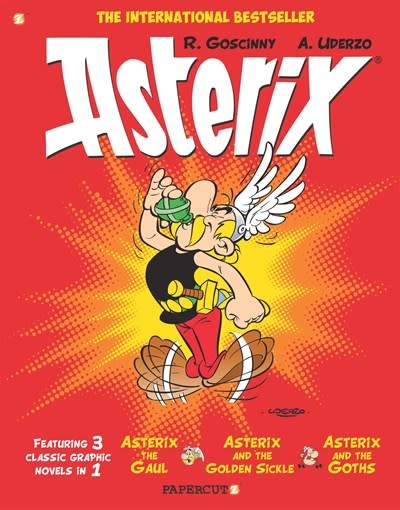 Asterix is celebrating 60 sensational years as an international comics superstar, and in the first collected edition from Papercutz, the stories are newly translated into American English for a new generation of fans! The story of Asterix starts here. These are the first three adventures of Asterix as he defends his tiny village from the overwhelming forces of the Roman Empire. Join the short, spunky, and super-powerful warrior from Gaul and his faithful friends--including the boar-eating delivery man Obelix and the ecologically-minded canine, Dogmatix--as they battle to protect their village against impossible odds. Asterix Omnibus volume one collects “Asterix the Gaul,” “Asterix and the Golden Sickle,” and “Asterix and the Goths.” Three classic adventures in one great volume.