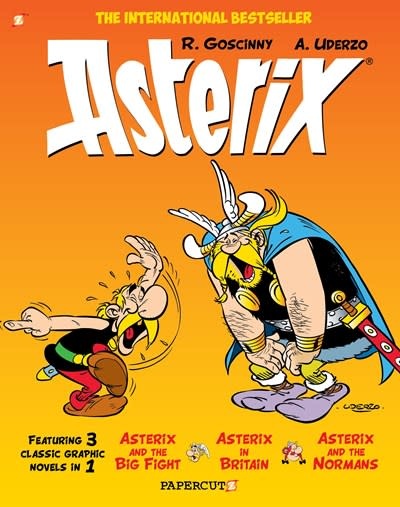 One of the world’s greatest comics characters, the ever-fearless Asterix, continues to battle supposedly unbeatable odds to protect his tiny village from the Roman Empire. Fortunately, all of the villagers have super-strength thanks to a secret potion. In “Asterix and the Big Fight,” one of the three classic Asterix graphic novels collected here, the Romans are beginning to wise up. Instead of trying to conquer Asterix’s village, the Roman’s challenge Vitalstatistx, chief of Asterix’s tribe, to a one on one battle with the Gallo-Roman Chief, Cassius Ceramix of Linoleum. As per Ancient Gaulish customs, the loser would forfeit his entire tribe to the winner. “Asterix in Britain,” the Romans have conquered all of Britain except for a single village in Kent. Sound familiar? Anticlimax, a member of that British village, travels to Gaul to seek help from his first cousin once removed, Asterix. Together, with Obelix, they decide to bring back a barrel full of the secret potion that imbues anyone with super-strength, but word leaks out, and the Romans will do anything they can to thwart this rescue mission. Finally, in “Asterix and the Normans,” Asterix encounters a group of Normans who want to learn all about fear, and that's just the tip of the iceberg as far as how many strange and crazy things happen in this particular adventure. We won’t even mention which pop star is parodied in this story! Just when you think you know what to expect in Asterix, the creators Goscinny and Uderzo throw things at you that you never could’ve imagined. That’s probably why Asterix remains such a successful comics character to this day!

Rene Goscinny was born in Paris in 1926. After growing up in Argentina, he came to America where he shared a studio with future Mad magazine co-founder Harvey Kurtzman and collaborators Will Elder and Jack Davis, an association that would mark him for life. In 1959, he founded the magazine Pilote which premiered what was to become the most successful comic series anywhere: Asterix. By the late sixties, Pilote turned to an older audience pioneering an absolute revolution in comics styles, narration and sophistication. Asterix was not the only greatly successful series Goscinny penned, others include western parody Lucky Luke and the Little Nicholas series illustrated by Sempé. Goscinny’s genius was not only in writing but also in editing, launching many famous and enormously innovative comics authors within the creative cauldron that Pilote magazine had become under his leadership, helping to raise comic art into a full-fledged art form. He died suddenly and way too early of cardiac arrest in 1977 at the age of 51.

Albert Uderzo was born in France 1927 to Italian Immigrants. In 1959 Goscinny and Uderzo became editor and artistic director (respectively) of Pilote magazine. Their creation, Asterix became a runaway success. After Goscinny's death in 1977, 26 volumes of Asterix were complete, Uderzo continued to write and illustrate the Asterix books on his own, publishing 8 volumes. The cover credits still read "Goscinny and Uderzo.” He retired from drawing in 2011 but still oversees Asterix and the current publications by Jean-Yves Ferri and Didier Conrad.