Home » Babble!: And How Punctuation Saved It 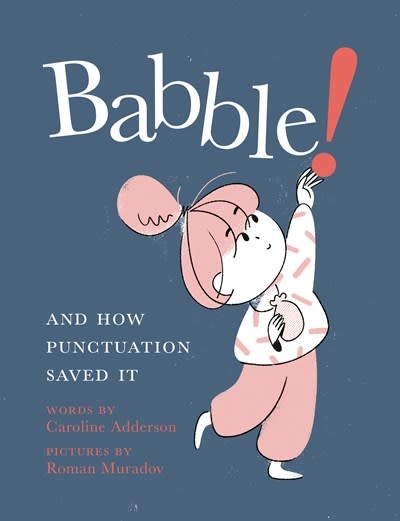 Babble!: And How Punctuation Saved It

A village is torn apart by its residents' inability to communicate, until a little girl shares the gift of punctuation in this humorous illustrated parable.

Chaos reigns in the village of Babble! All day, the residents fight, yell and argue, and no one is heard or understood . . . until a mysterious little girl arrives and gives the locals something very strange: a period. But what is this thing that looks like a freckle or a spot? The villagers don't even know how to ask. However, as the girl begins to share more gifts — a question mark, quotation marks — the residents slowly learn how to communicate. But when more fights arise and disaster strikes, can punctuation truly save the day?

CAROLINE ADDERSON was born and raised in Alberta and now lives in Vancouver with her husband, son and Jack Russell terrier Mickey. She earned a Bachelor of Education with a concentration in Creative Writing from the University of British Columbia and spent the next ten years working as an ESL teacher. She now teaches at Simon Fraser University and writes for both children and adults. Caroline's books for kids are frequently featured on Canadian award lists, including the Tree Awards, the Chocolate Lily Awards and the CCBC and OLA Best Bets, and her titles include It Happened on Sweet Street, the Jasper John Dooley series, the Bruno series, A Simple Case of Angels, Norman, Speak!, Eat, Leo! Eat! and I Love You One to Ten. Caroline's fiction for adults have been awarded numerous prizes, including the IMPAC Dublin Literary Award, two Commonwealth Writers' Prizes, the Scotiabank Giller Prize longlist, the Governor General's Literary Award and the Rogers' Trust Fiction Prize.

ROMAN MURADOV is an award-winning editorial artist and graphic novelist who has created illustrations for The New Yorker, New York Times, Criterion, Vogue, Paris Review, Wired, the Wall Street Journal, TIME Magazine, GQ, Warby Parker, NPR, Monocle, Lucky Peach, Apple, Google, Airbnb, Lyft, Patreon and Dropbox, as well as the covers of the Penguin Classics Centennial Editions of James Joyce's Dubliners and A Portrait of the Artist as a Young Man. He has won multiple medals from the Society of Illustrators as well as the Young Guns Award from the Art Directors Club, and his work has been featured in The Comics Journal, American Illustration and Creative Quarterly, among others.