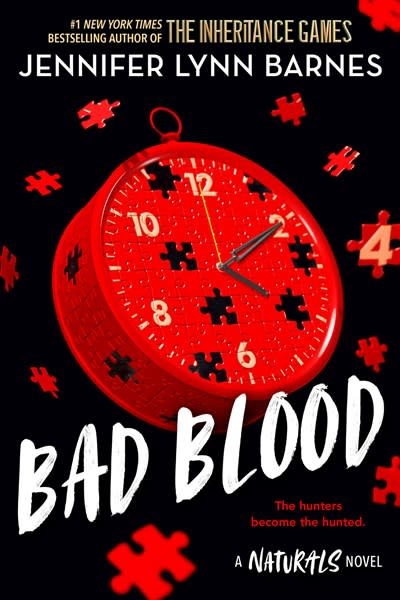 All of your burning questions are answered in this shocking conclusion to the Naturals series--now with a bonus Naturals novella, Twelve, in print for the first time!

When Cassie Hobbes joined the FBI's Naturals program, she had one goal: uncover the truth about her mother's murder. But now, everything Cassie thought she knew about what happened that night has been called into question. Her mother is alive, and the people holding her captive are more powerful -- and dangerous -- than anything the Naturals have faced so far. As Cassie and the team work to uncover the secrets of a group that has been killing in secret for generations, they find themselves racing a ticking clock. When the bodies begin piling up, it soon becomes apparent that this time, the Naturals aren't just hunting serial killers.

Don't miss a minute of this fan-favorite series from the #1 bestselling author of The Inheritance Games, perfect for fans of One of Us is Lying and A Good Girl's Guide to Murder.

Jennifer Lynn Barnes is the #1 New York Times bestselling author of more than twenty acclaimed young adult novels, including The Inheritance Games trilogy, Little White Lies, Deadly Little Scandals, The Lovely and the Lost, and The Naturals series: The Naturals, Killer Instinct, All In, Bad Blood, and the e-novella, Twelve. Jen is also a Fulbright Scholar with advanced degrees in psychology, psychiatry, and cognitive science. She received her Ph.D. from Yale University in 2012 and was a professor of psychology and professional writing at the University of Oklahoma for many years. She invites you to her online at www.jenniferlynnbarnes.com or follow her on Twitter @jenlynnbarnes.