Home » Barb and the Ghost Blade 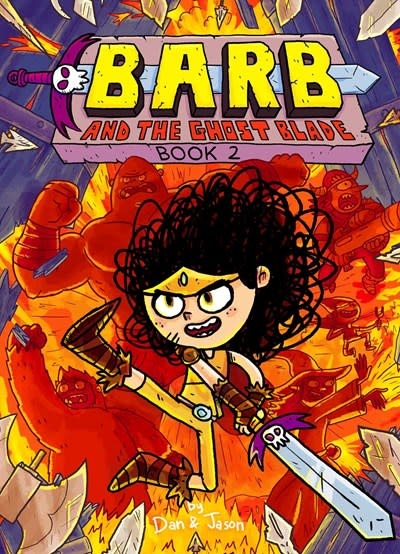 Barb and the Ghost Blade

She-Ra and the Princesses of Power meets Dav Pilkey’s Dog Man in this high-octane and uproariously funny second book following Barb and her trusty yeti pal, Porkchop, on their quest to rescue her fellow warriors and liberate Bailiwick from the evil villain Witch Head!

Barb is a Berzerker, part of an elite crew of warriors who protect the land of Bailiwick from the scourge of monsters. The evil Witch Head has captured all the adult Berzerkers and Barb’s the only one who can save them. But she’s not alone—Barb’s got her own amateur crew of would-be zerks, made up of farmers, monsters, and her best pal Porkchop the yeti.

This ragtag gang must infiltrate Maug Horn, the monster capital where only monsters are allowed, and find Franny Fire Fingers, who they hope will lead them to the Wise Wizards and the power to fight Witch Head. But when even the powerful Shadow Blade sword is no match for the evil Barb encounters, she must learn that her true power comes from her own heart.