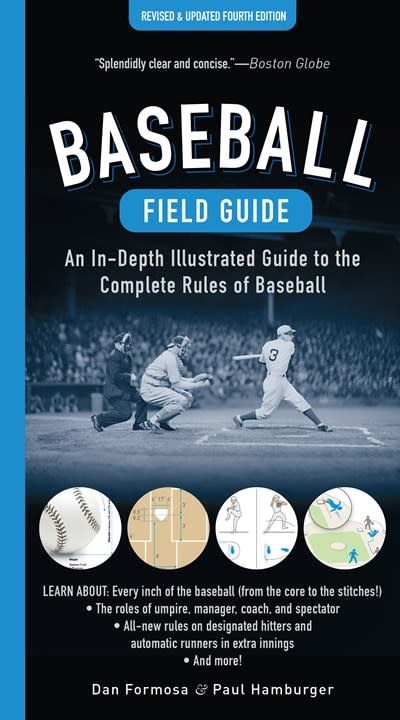 Now in its fourth edition—a clear guide to the complete rules of baseball, updated in 2022!

For new and seasoned fans alike, this visual guide demystifies baseball’s every rule— updated in 2022!

Admit it: Even if you’re a devoted fan of America’s national pastime, sometimes an umpire’s call can be a little baffling. And for newcomers, Major League Baseball’s nuanced rules—developed and revised over more than a century—are downright perplexing. With the latest updates (including the runner on second for extra innings and universal designated hitters), the Baseball Field Guide clearly explains:rules that apply before, during, and after the gameequipment specifications and field requirementsduties of the coaches, managers, and umpiresrules for spectators (yes, they have rules, too!)the simplest explanation anywhere of the Infield Fly Rule, and more!Designed for quick, intuitive searches, this entertaining reference will help you better understand and enjoy every aspect of the sport.

Dan Formosa, PhD, is an award-winning consultant based in Piermont, New York, and New York City. He grew up playing stoopball and is a die-hard Yankees fan.

Paul Hamburger, originally from Brooklyn, is a creative director and recent transplant to Los Angeles. As a Mets fan, he is resentful toward the success of other local baseball organizations.