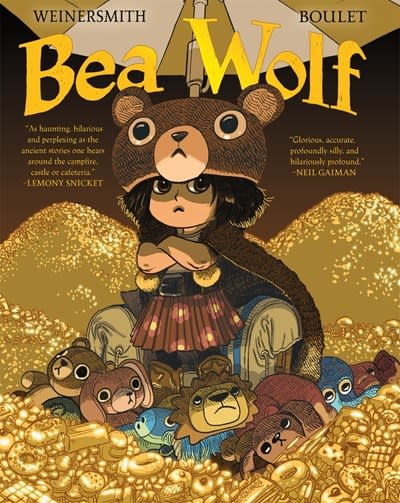 A modern middle-grade graphic novel retelling of Beowulf, featuring a gang of badly behaved kids who must defend their tree house from a fun-hating adult who can turn children into grown-ups instantly.

Listen! Hear a tale of mallow-munchers and warriors who answer candy’s clarion call!

Somewhere in a generic suburb stands Treeheart, a kid-forged sanctuary where generations of tireless tykes have spent their youths making merry, spilling soda, and staving off the shadow of adulthood. One day, these brave warriors find their fun cut short by their nefarious neighbor Grindle, who can no longer tolerate the sounds of mirth seeping into his joyless adult life.

As the guardian of gloom lays siege to Treeheart, scores of kids suddenly find themselves transformed into pimply teenagers and sullen adults! The survivors of the onslaught cry out for a savior—a warrior whose will is unbreakable and whose appetite for mischief is unbounded.

They call for Bea Wolf.

Boulet is a French cartoonist living in Paris. He is the author of forty published books, most of them for young readers. He also worked on two books of the Dungeon series with Lewis Trondheim and Joann Sfar.