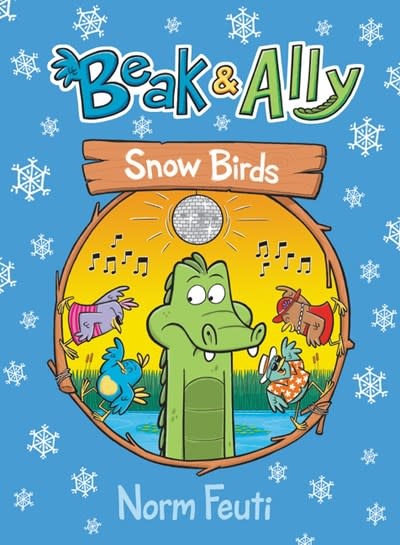 Beak & Ally are back in this Theodor Seuss Geisel Honor Award–winning series! This fun and funny buddy comedy is perfect for fans of Narwhal & Jelly, emerging readers, and all kids who love comics.

Winter is coming! Beak loves the snow, but his hopes are dashed when Ally informs him the swamp stays warm year-round and not much changes. As a matter of fact, the only big change is that it gets a lot more crowded! Beak soon discovers what Ally means when the snow birds arrive . . . Hawaiian shirt–wearing, music-jamming new neighbors who have flown south for the winter.At first, Beak is thrilled when they decide to spend their vacation in his tree—he loves to party! But when the noise gets louder and louder, it’s time for Beak and Ally to take action. Confronting new friends can be hard, but anything is possible when you have your best friend by your side to help.It can be hard asking new friends to change their ways, but can Beak and Ally convince the snow birds to bring peace and quiet back to the swamp?

Norm Feuti is a Geisel Honor–winning, nationally syndicated cartoonist, author, and freelance illustrator. He is the author-illustrator of the graphic novel The King of Kazoo and the early graphic novel series Hello, Hedgehog! Norm lives in Massachusetts with his wife and children. Norm often prefers to be alone, but enjoys the company of noisy friends from time to time.