Home » Because of You, John Lewis: The True Story of a Remarkable Friendship 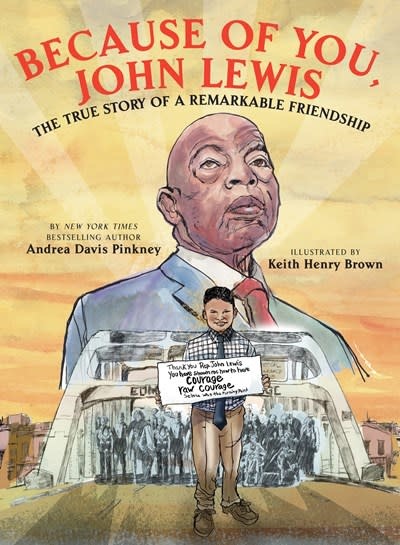 Because of You, John Lewis: The True Story of a Remarkable Friendship

An inspiring story of a friendship between Congressman John Lewis and ten-year-old activist Tybre Faw by New York Times bestselling and Coretta Scott King Award-winning author Andrea Davis Pinkney!A Junior Library Guild SelectionTen-year-old Tybre Faw is obsessed with history and the civil rights movement, and he devours every book he can find on the subject. When he learns of Congressman John Lewis's harrowing and heroic march across the Edmund Pettus Bridge in the fight for the right to vote, Tybre is determined to meet him.Tybre's two grandmothers take him on the seven-hour drive to Selma. And as the two meet and become fast friends, Tybre joins Lewis for the annual walk across the Edmund Pettus Bridge!When John Lewis is laid to rest, Tybre is invited to read Lewis's favorite poem, "Invictus," at the funeral service. Pinkney weaves this story of a boy with a dream--with the story of a true-life hero (who himself was inspired by Martin Luther King when he was a boy).Who will be next to rise up and turn the page on history?

Keith Henry Brown is the illustrator of the picture book Birth of the Cool: How Jazz Great Miles Davis Found His Sound. He got his start drawing superheroes, but jazz musicians like Miles Davis have always been heroes to him. A graduate of the High School of Art and Design as well as Parsons School of Design, he combined his love of art and jazz as the creative director of jazz at Lincoln Center. He has also designed and illustrated promotional graphics and jazz album covers. He lives in Brooklyn, New York. You can visit him online at keithhbrown.com.

Andrea Davis Pinkney is the New York Times bestselling and award-winning author of nearly 50 books for young readers, among them The Red Pencil and A Poem for Peter, as well as several collaborations with her husband, Brian Pinkney, including Martin Rising: Requiem for a King, Sit-In, and Hand in Hand, which received the Coretta Scott King Book Award. Andrea Davis Pinkney lives in New York City. You can follow her on Twitter at @AndreaDavisPink, on Instagram at @Andreapinkney1, and on Facebook at @andreadavispinkey.