Home » Big Nate: In the Zone 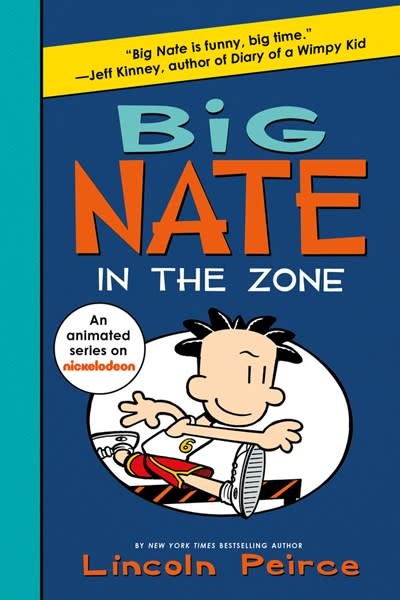 Big Nate: In the Zone

Big Nate is a New York Times bestselling series with more than 5 million books in print! In Big Nate: In the Zone, nothing is going Nate’s way. Until all of a sudden, good luck is everywhere he turns! Nate’s int he zone. But how long will it last?“Big Nate is funny, big time,” says Diary of a Wimpy Kid author Jeff Kinney, and this sixth Big Nate novel is a laugh a minute!

Nate Wright, ultimate cartoonist and 6th grade king of detention, is not having the best luck…in fact, he’s not having ANY luck. But with a little boost thanks to Chad’s lucky foot, all of a sudden everything is going Nate’s way! How long can Nate stay in the zone?Big Nate: In the Zone boasts more than 500 black-and-white illustrations, including a brand-new rival for Nate, an Enslave the Mollusk performance, and awesome Nate Wright original comix. And there’s big-time buzz--Big Nate: In a Class by Himself was selected for the Horn Book Fanfare List of Best Books of 2010 and BarnesandNoble.com’s Top 10 and was an IndieBound Spring Pick and a Children’s Choice Book Award finalist. In A Class By Himself was also the 2011-2012 Great Stone Face Book Award winner in New Hampshire! Big Nate on a Roll was nominated for the Young Reader’s Choice Award of the Pacific Northwest and won the Southwark Book Award in the UK. And Big Nate Goes for Broke hit #22 on the USA Today bestseller list when it debuted! When Big Nate Flips Out came out, the series hit the New York Times, USA Today, and Publishers Weekly bestseller lists!In May 2013, the Big Nate Musical will debut in Washington, DC! And over the course of 2013, Lincoln Peirce and the Big Nate team will be working toward breaking the world record for longest comic strip!Big Nate has been licensed in twenty-five foreign deals so far, and the Big Nate: Comix by U! app has charted in the iTunes store for both the iPad and iPhone versions. The first five Big Nate novels and two comic compilations are available as ebooks for your Apple device, Color Nook, or Kindle Fire! In July 2012, Pressman Games released a Big Nate board game, card game, and two jigsaw puzzles nationwide! There’s also an apparel deal for Big Nate in the works!Nate’s hilarious antics just keep on coming, and they will have you rolling on the floor with laughter!WHAT KIDS HAVE TO SAY:“It’s my favorite series.”-Lucas, age 8“Big Nate is really funny! I love it!”-Amelia, age 8“Big Nate is the best book I’ve read in my whole entire life!”-Matan, age 8“Big Nate is going to blow your pants off.”-Liam, age 8 1/2“I read it in one day! It’s really funny!!”-Maeve, age 9“I hate reading, but I read Big Nate all by myself.”-Kate, age 7“I read it fifty-seven times.”-Christian, age 8“I want another Big Nate book sooner rather than later.”-Max, age 9

Lincoln Peirce (pronounced “purse”) is a cartoonist/writer and New York Times bestselling author of the hilarious Big Nate book series. Peirce is also the creator of the comic strip Big Nate, that debuted in 1991 and appears in over 300 newspapers worldwide and online daily at www.gocomics.com, and is featured on the website Poptropica, www.poptropica.com. His BIG NATE novels are BIG NATE: IN A CLASS BY HIMSELF, BIG NATE STRIKES AGAIN, BIG NATE ON A ROLL, BIG NATE GOES FOR BROKE, and BIG NATE FLIPS OUT, in addition to three activity books, BIG NATE BOREDOM BUSTER, BIG NATE FUN BLASTER, and BIG NATE DOODLEPALOOZA, as well as three HarperCollins comic compilations entitled BIG NATE: WHAT COULD POSSIBLY GO WRONG?, BIG NATE: HERE GOES NOTHING, and BIG NATE: GENIUS MODE. Lincoln’s boyhood idol was Charles Schulz of Peanuts fame, but his main inspiration for Big Nate has always been his own experience as a sixth grader. Just like Nate, Lincoln loves comics, ice hockey, and Cheez Doodles (and dislikes cats, figure skating, and egg salad). His Big Nate books have been featured on Good Morning America and in the Boston Globe, the Los Angeles Times, USA Today, and the Washington Post. He has written for Cartoon Network and Nickelodeon, and enjoys visiting schools and speaking to students about cartooning and storytelling. Lincoln Peirce grew up in Durham, New Hampshire, earned a B.A. from Colby College, a Master’s Degree in drawing/painting from Brooklyn College, and has also taught art at a New York City high school for three years. A fan and collector of classic country music, Lincoln also hosts a local radio show devoted to honky tonk and western swing. Lincoln lives with his wife and two children in Portland, Maine. You can visit him online at www.bignatebooks.com, where Lincoln blogs twice a week.