Home » Big Nate Lives It Up 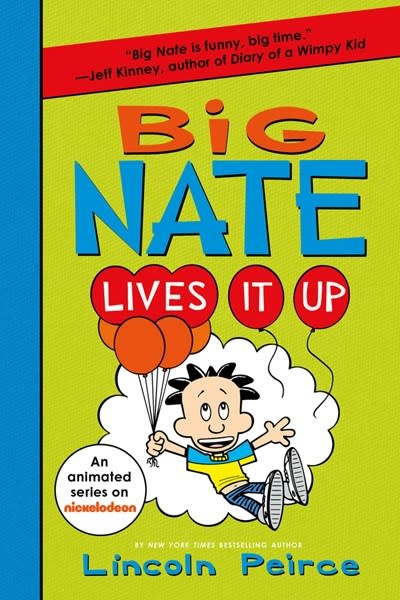 Big Nate Lives It Up

This is the seventh novel in the New York Times bestselling Big Nate series by Lincoln Peirce. When Principal Nichols asks Nate to be buddies with dorky new kid Breckenridge Puffington III-Nate doesn’t know what he’s in for!“Big Nate is funny, big time.”—Jeff Kinney, author of Diary of a Wimpy Kid.With black and white illustrations, comics, and doodles throughout, BIG NATE blazes an unforgettable trail through his school P.S. 38.

The latest illustrated novel from Lincoln Peirce is a laugh-out-loud must-read starring the one and only cartooning genius, king of detention, and Cheez Doodle connoisseur, Nate Wright.Principal Nichols wants Nate to be buddies with dorky new kid Breckenridge Puffington III and show him around. That’s no easy task when Breckenridge is a total fun-sponge and his greatest passion is drawing plants. There’s also something really familiar about this guy…what in the world could it be? The shocking answer is sure to blow your pants off!Supports the Common Core State Standards.

Lincoln Peirce (pronounced “purse”) is a cartoonist/writer and New York Times bestselling author of the hilarious Big Nate book series (www.bignatebooks.com), now published in twenty-five countries worldwide and available as ebooks and audiobooks and as an app, Big Nate: Comix by U! He is also the creator of the comic strip Big Nate. It appears in over 300 U.S. newspapers and online daily at www.gocomics.com/bignate. Lincoln’s boyhood idol was Charles Schulz of “Peanuts” fame, but his main inspiration for Big Nate has always been his own experience as a sixth grader. Just like Nate, Lincoln loves comics, ice hockey, and Cheez Doodles (and dislikes cats, figure skating, and egg salad). His Big Nate books have been featured on Good Morning America and in the Boston Globe, the Los Angeles Times, USA Today, and the Washington Post. He has also written for Cartoon Network and Nickelodeon. Lincoln lives with his wife and two children in Portland, Maine.