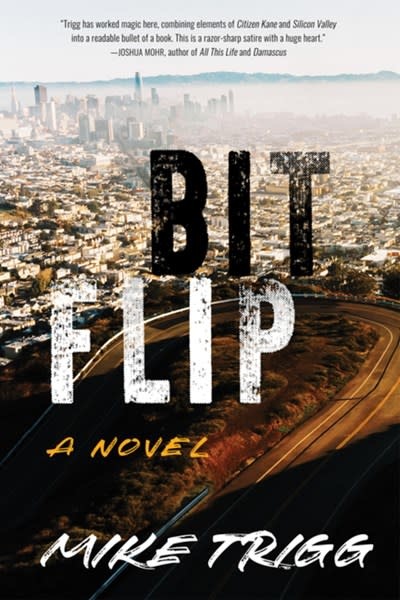 $17.95
Fortysomething Sam Hughes is at a crossroads—disillusioned professionally, stretched financially, strained in family life. As he teeters toward midlife crisis, a return to his midwestern roots and fortunate mishap give his start-up career one more chance—but also force him to choose between massive entrepreneurial success and his morals, friends, and family.

Combining the corporate intrigue of Joseph Finder, the satirical cultural critique of Dave Eggers, and the domestic drama of Laura Dave, Bit Flip is a fast-paced contemporary thriller that delivers an authentic insider’s view of the corrupting influences of greed, entitlement, and vanity in technology start-ups.

Tech executive Sam Hughes came to Silicon Valley to “make the world a better place.” He’s just not sure he’s doing that anymore. And when an onstage meltdown sends him into a professional tailspin, he suddenly sees the culture of the Bay Area’s tech bubble in a new light.

Just as Sam’s wondering if his start-up career and marriage might both be over at fortysomething, an inadvertent discovery pulls him back into his former company, where he begins to unravel the insidious schemes of the founder and venture investors.

Driven by his desire for redemption, Sam discovers a conspiracy of fraud, blackmail, and manipulation that leads to tragic outcomes—threatening to destroy not only the company but also his own moral compass. Entangled in a web of complicity, how far will Sam go to achieve his dreams of entrepreneurial success?