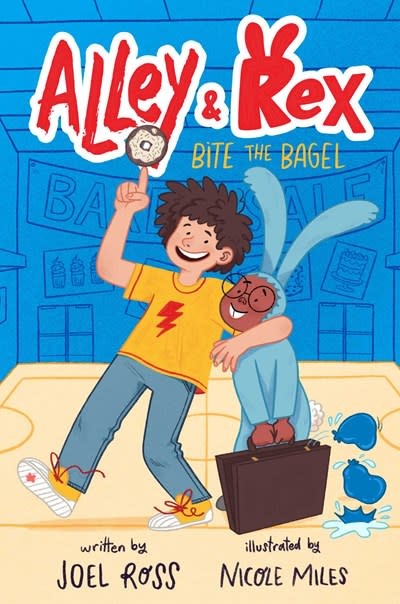 Loveable prankster Alley and bunny-suited brainiac Rex team up again, this time to help each other survive PE and save breakfast, one mutant bagel at a time in this hilarious story that’s perfect for fans of Diary of a Wimpy Kid and Wayside School!

Rex can rock a bunny suit like no one else. But his PE teacher insists that all students must wear gym clothes—or face a punishment worse than dodgeball. Alley vows to help his pal Rex. And to save the free breakfast cart that was closed due to budget cuts. Everyone knows that kids can’t learn on empty stomachs!

Joel Ross is the author of The Fog Diver, Beast & Crown, and Alley & Rex series. He’s never worn a school uniform, but he did try a spoonful of calves’ foot jelly once. The taste lingers. Visit him at TheJoelJoel.com.

Nicole Miles was born in the United States but grew up in the Bahamas where all schools have uniforms but nobody eats calves’ foot jelly (as far as she is aware). She feels this is a fair compromise. She now lives in the United Kingdom, and her tiny place on the internet is NicoleMillo.com.