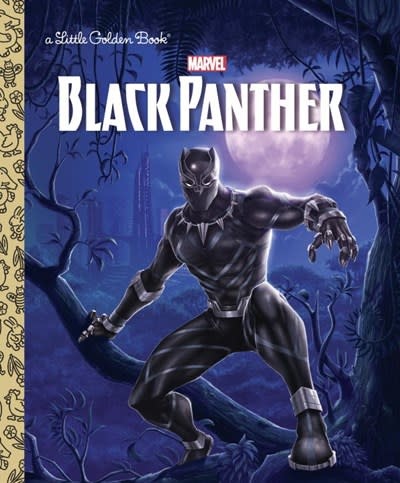 Meet Marvel’s Black Panther! As an Avenger, this Super Hero uses his strength, speed, and unbreakable claws to stop evil-doers! Boys and girls ages 2-5 will love this action-packed Little Golden Book as they learn about the Black Panther—from his Wakandan origins to his powers as well as his friends and foes.

Marvel Super Heroes are some of the most popular comic book characters in the world, and include: Spider-Man, the Hulk, Iron Man, Captain America, Thor, Black Panter, Ms. Marvel, and the Avengers. The Marvel Little Golden Books continues to expand right along with the Marvel Cinematic Universe with two to four new titles each year.

Frank Berrios is a former comic book editor at DC Comics and a widely published children’s book author, editor, and illustrator. He’s written many Little Golden Books, including Football with Dad and Soccer with Mom, as well as Poppy’s Party (DreamWorks Trolls).

Patrick Spaziante is an American comic book artist known for his work for Archie Comics, in particular his interior pencil and cover work for Sonic the Hedgehog, Sonic X and Sonic Universe.