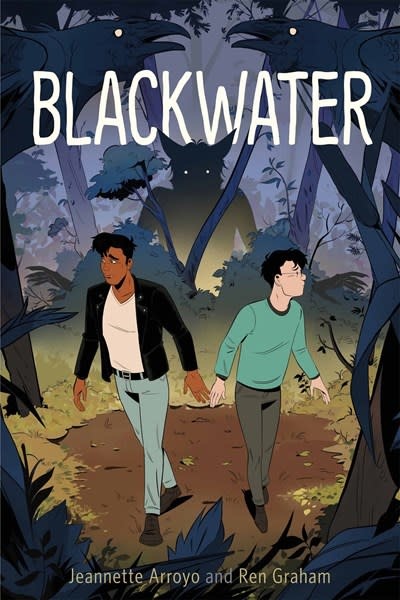 Riverdale meets Stranger Things in this debut queer YA graphic novel, developed from a hit webcomic. Set in the haunted town of Blackwater, Maine two boys—one a star athlete bitten by a werewolf, the other a social recluse who can see ghosts—fall for each other as they dig for clues to a paranormal mystery.

Tony Price is a popular high school track star and occasional delinquent aching for his dad’s attention and approval. Eli Hirsch is a quiet boy with a chronic autoimmune disorder that has ravaged his health and social life. What happens when these two become unlikely friends (and a whole lot more . . . ) in the spooky town of Blackwater, Maine? Werewolf curses, unsavory interactions with the quarterback of the football team, a ghostly fisherman haunting the harbor, and tons of high school drama.

Co-illustrated by both creators, who alternate drawing chapters in their own unique and dynamic styles, Blackwater combines the spookiness of Anya's Ghost with the irreverent humor of Nimona. To check out the webcomic, visit blackwatercomic.tumblr.com.

Jeannette Arroyo was born and raised in New Mexico but relocated to the rainier Seattle area. In addition to her first graphic novel, Blackwater, she has also done freelance in animation and children’s book illustrations. A fan of the horror genre, Jeannette likes to mix in some lighthearted spooky elements in her work.

Ren Graham is a fiction writer and illustrator currently residing in the rainy Pacific Northwest. They have a B.A. in art history and a graduate studies certificate in science illustration, so biology, world mythology, and natural elements influence and reappear in their work. Ren is interested in spooky stories, chilly hikes in the woods, and the ways in which art and science intersect.