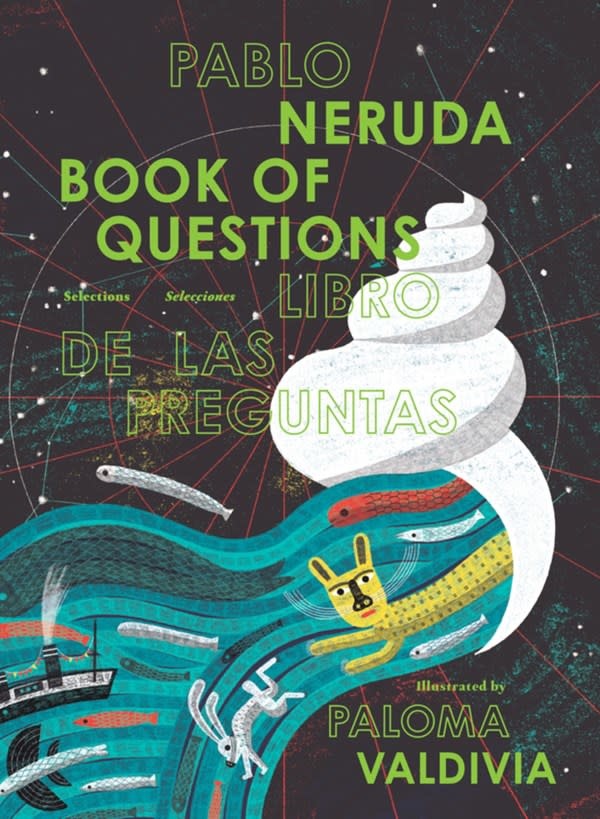 Where is the center of the sea? Why do the waves never break there? A book containing unanswerable, fantastical questions, inviting us to be curious, while simultaneously embracing what we cannot know.

This bilingual Spanish-English edition is the first illustrated selection of questions, 60 in all, from Pablo Neruda's original poem (316 questions) The Book of Questions. Holding the wonder and mystery of childhood and the experience and knowing that come with growing up, these questions are by turns lyrical, strange, surreal, spiritual, historical and political. They foreground the natural world, and their curiosity transcends all logic; and because they are paradoxes and riddles that embrace the limits of our ability to know, they engage with human freedom in the deepest way, removing the burden and constraint that somehow, we are meant to have answers to every question. Gorgeously, cosmically illustrated by Paloma Valdivia, here Neruda's questions, already visual in themselves, gain a double visuality that makes them even more palpable and resonant. So clearly rooted in Chilean landscapes as they are, the questions are revealed as a communion with nature and its mysteries.

Pablo Neruda (Parral, Chile, 1904 - Santiago de Chile, Chile, 1973), whose real name was Neftalí Reyes Basoalto, is undoubtedly one of the pinnacles of world poetry of the last century. Famous from a very young age, he lived in Santiago from 1920 to 1927, years in which he wrote, among others, the collection of poems "Twenty love poems and a Song of Despair," which has perhaps gained widest popularity of all his work and marks the moment when he first achieves his full powers as a Spanish-language poet. Neruda traveled extensively and and served as Chile's ambassador to several countries, including Burma, France, and Argentina. He was a prominent political activist, member of the Communist Party, and a militant intellectual. Endowed with incomparable verbal power, he also founded a revolutionary conception of poetry. His literary career is one of the main expressive adventures of the lyric in the Spanish language. In awarding him the Nobel Prize for Literature in 1971, the Swedish Academy described him as a poet "who brings to life the destinies and dreams of an entire continent." Neruda was also awarded the International Peace Prize.Born in Chile in 1978, Paloma studied design at the Pontifical Catholic University of Chile and studied Creative Illustration at the Eina School of Art and Design in Barcelona, Spain. Her main passion is illustrated books for children. Her book have been translated into 12 languages. As a teacher, she directs the degree program in "Illustration and Autobiographical Narrative" at the Pontifical Catholic University of Chile. She lives in Santiago with her family.