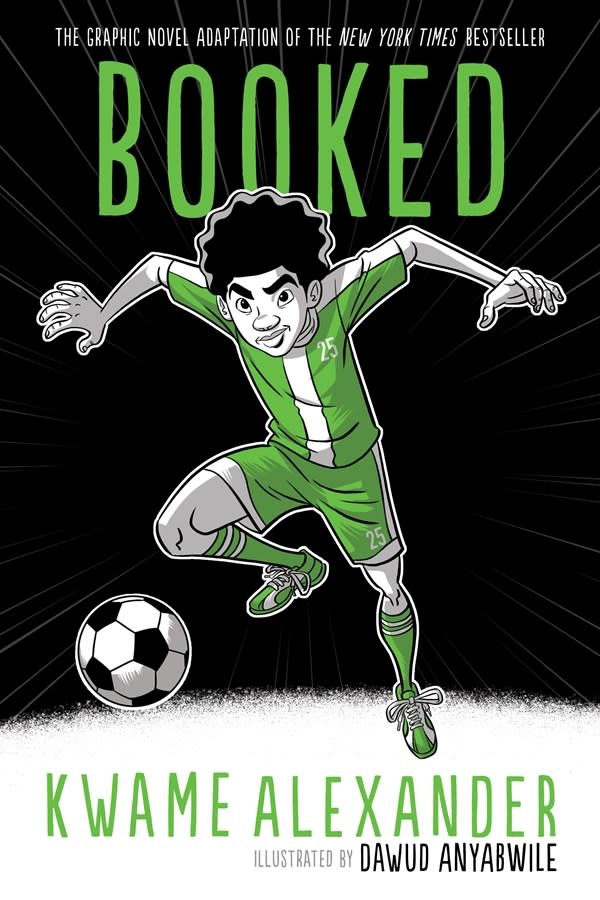 In this electric and heartfelt follow-up to Newbery Medal–winner The Crossover, soccer, family, love, and friendship take center stage as twelve-year-old Nick learns the power of words as he wrestles with problems at home, stands up to a bully, and tries to impress the girl of his dreams.  From the dynamic team behind the graphic novel edition of The Crossover.

Twelve-year-old Nick is a soccer-loving boy who absolutely hates books. In this graphic novel version of Booked, the follow-up to the Newbery Medal–winning novel The Crossover, soccer, family, love, and friendship take center stage as Nick tries to figure out how to navigate his parents’ divorce, stand up to a bully, and impress the girl of his dreams. These challenges—which seem even harder than scoring a tie-breaking, game-winning goal—change his life, as well as his best friend’s.

Kwame Alexander is a poet, educator, and the New York Times best-selling author of more than thirty-five books, including Rebound, the follow-up to his Newbery medal-winning middle grade novel, The Crossover. Some of his other works include Booked, which was longlisted for the National Book Award, The Playbook: 52 Rules to Help You Aim, Shoot, and Score in this Game of Life, Swing, and the picture books Out of Wonder and The Undefeated, which was longlisted for the National Book Award and won the Caldecott Medal, a Newbery Honor, and the Coretta Scott King Illustrator Award.He is a regular contributor to NPR's Morning Edition, currently serving as their poet ambassador.He lives with his family in the UK. Visit his website at www.kwamealexander.com or find him on Twitter and Instagram @kwamealexander.Dawud Anyabwile is an Emmy Award winning artist, illustrator and co-creator of the groundbreaking Comic Book Series, Brotherman: Dictator of Discipline. Anyabwile has worked with companies such as Cartoon Network, Turner Studios, NBA TV, Nickelodeon, and many others as a character designer, storyboard artist, illustrator and concept artist. Anyabwile illustrated the graphic novel adaptation of the New York Times best selling novel, Monster by Walter Dean Myers. Born and raised in Philadelphia, PA Anyabwile now volunteers, teaches art classes to young students, and gives lectures when he isn't working on his art.