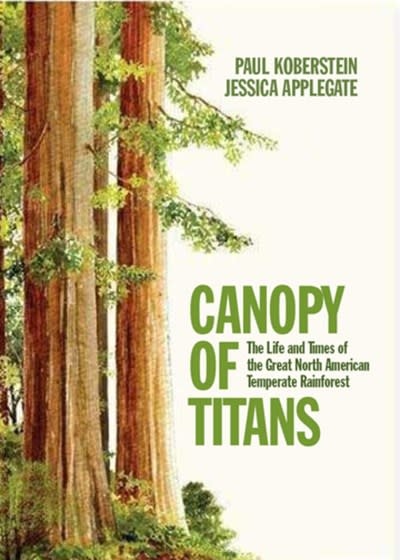 Canopy of Titans: The Life & Times of the Great North American Temperate Rainforest

"Trees are crucial in preserving a liveable future. Canopy of Titans makes an eloquent plea for saving one of North America's last great forests."

— Elizabeth Kolbert, author of The Sixth Extinction: An Unnatural HistoryCanopy of Titans examines the global importance of the Pacific Coastal Temperate Rainforest that stretches from Northern California to Alaska and catalogs the threats to this vital environmental resource.The product of years of on-the-ground reporting, this richly illustrated book celebrates the beauty and complexity of one of the world’s great forests. It provides readers with easy-to-grasp insights into the science behind carbon sequestration and the value of forests as climate mitigation. The story is organized along two broad narratives: A geographical arc runs from south-to-north beginning with the redwood forest of Northern California and ending in the Tongass National Forest in Alaska. A temporal arc starts with wildfires raging across the American West in the summer of 2020 and ends at the UN Climate Change Conference in Glasgow in November 2021, with many historical flashbacks in between.Along the way, Applegate and Koberstein pull back the curtain on policies of governmental bodies that have seriously diminished the rainforest’s capacity to store carbon, and uncover industry practices that have led to the destruction of swaths of a major ecological resource. Additionally, using an environmental justice perspective, the book shines a light on the indigenous communities that have lived in the rainforest for millennia, and the impact forest policies have had on their lives.

Paul Koberstein co-founded Cascadia Times in 1995 and has been its editor ever since. Paul, a journalist for 40 years, was a staff writer for The Oregonian and Willamette Week in the 1980s and 1990s. In 1995, Utne Reader named Cascadia Times one of the best new environmental publications in North America. In 2016, Paul won the Bruce Baer Award given annually to an Oregon journalist for excellence in investigative journalism in recognition for his investigation of industrial toxic air pollution. In 2004, he won the John B. Oakes Award for the most distinguished environmental journalism in the United States for a series of articles on wildlife poaching in the North Pacific Ocean. Paul is a native of Oregon and currently resides in Portland.Jessica Applegate is managing editor and photographer for Cascadia Times.  She is a lifelong environmental activist and public servant and works with young children with special needs. Jessica is a founding member of Eastside Portland Air Coalition, a grass roots group that spurred creation of statewide air toxics regulatory overhaul, Cleaner Air Oregon. She was appointed by Governor Brown to the subsequent rules advisory committee resulting in the passage of historic legislation curbing industrial air pollution in Oregon.  She is currently an advisory board member for Beyond Toxics in Eugene, Oregon. Jessica holds a master of communication sciences degree from California State, Northridge. During her stint with Cascadia Times she co-wrote award-winning articles exposing fraud in California’s carbon offsets program.  She also owns a small-scale organic vineyard in Douglas County, Oregon and loves to wander in the woods whenever the stars align. Jessica resides in Portland, Oregon.