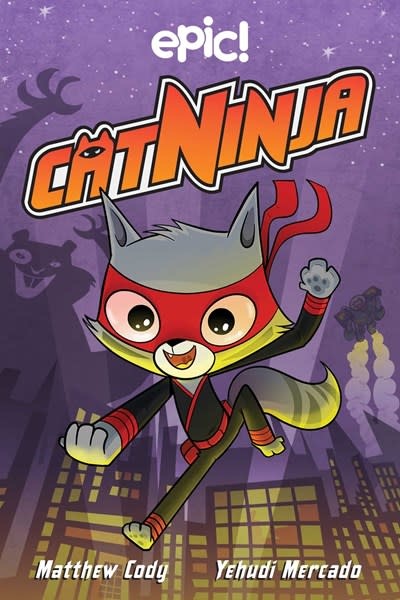 Beware, villains! Cat Ninja may appear to be nothing more than a silly internet meme. But he is evil's greatest enemy, and the silent master of Kat Fu and carpet scratching! From Epic! Originals, Cat Ninja is a hilarious graphic novel series about a lovable cat with a heroic alter-ego.

Raised from a kitten by a kindly old ninja master, Claude now spends his days as the pampered house cat of an eleven-year-old boy. But when trouble arises, Claude dons his mask and springs into action as Cat Ninja—Metro City's secret protector! In Book 1 of the series, follow our feline hero’s early exploits as he tries to keep his secret identity under wraps while thwarting the evil plans of slimy thugs, rampaging robots, and a certain rodent nemesis who lives under the same roof!

Matthew Cody is the author of several popular books, including the award-winning Supers of Noble’s Green trilogy: Powerless, Super, and Villainous. He is also the author of Will in Scarlet and The Dead Gentleman, as well as the fantasy series The Secrets of the Pied Piper. He lives in Manhattan with his wife and son.

Yehudi Mercado was born in Mexico City and raised in Houston, Texas. He is a former Disney art director turned successful graphic novelist. His graphic novels as writer-illustrator include Buffalo Speedway, Pantalones, TX, Rocket Salvage, and Sci-Fu: Kick it Off. He is currently showrunning a narrative podcast based on his graphic novel Hero Hotel.