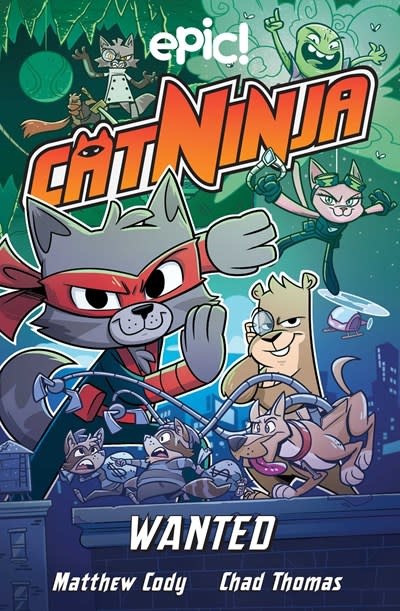 In Book 3 of the hugely popular Cat Ninja series, small-time crooks, sidekicks, and the wannabe supervillains who made our heroes who they are all get a chance to tell their stories––and their stories are hilarious!

Cat Ninja: Wanted features Metro City's favorites and newcomers in tales that include a nearly cat-astrophic case of stolen identity, the not-so-villainous adventures of Master Hamster, and Adonis's first mission as one of the good guys. Enjoy six stand-alone stories, plus a five-part Cat Ninja special miniseries!

The stories in Cat Ninja: Wanted teach readers that:People (and villains!) can changeEveryone deserves a second chanceYou don't need superpowers to be a hero!

Matthew Cody is the author of several popular books, including the award-winning Supers of Noble’s Green trilogy: Powerless, Super, and Villainous. He is also the author of Will in Scarlet and The Dead Gentleman, as well as the fantasy series The Secrets of the Pied Piper. He lives in Manhattan, New York, with his wife and son.

Colleen AF Venable is the author of National Book Award-Longlisted Kiss Number 8, a graphic novel co-created with Ellen T. Crenshaw. Her other books include Katie the Catsitter with Stephanie Yue, Mervin the Sloth Is About to Do the Best Thing in The World with Ruth Chan, The Oboe Goes Boom Boom Boom with Lian Cho, and the Guinea Pig, Pet Shop Private Eye series, illustrated by Stephanie Yue and nominated for the Best Publication for Kids Eisner.

Marcie Colleen loves to spend her days watching cartoons with her favorite sock monkey. Her favorite color is blue.

Chad Thomas first picked up a pencil in 1983, decided to draw cartoons in 1988, and finally started getting paid for it in 2005. He loves his family, comic books and Star Wars, and will let his children beat him in Checkers, but never in Mario Kart. He has worked with a number of publishers in the comic industry on books such as TMNT, Star Wars Adventures, and Mega Man. He has also illustrated science and learning activity books with a number of different children's publishers.

Derek Laufman has been a professional illustrator for 20 years, during which time he's had the pleasure of working for Marvel, Warner Brothers, Disney Publishing, Hasbro, and Mattel. He is the designer of Marvel’s Super Hero Adventure line as well as DC’s Super Friends toddler branding. He is also the creator of the comic series RuinWorld published by BOOM! Studios. Derek is married with two young sons and lives in London, Ontario.

Warren Wucinich is a comic book creator and part-time carny who has been lucky enough to work on such cool projects as Invader ZIM, Bright Family, Courtney Crumrin, and Cat Ninja. He is also the co-creator of the YA graphic novel Kriss: The Gift of Wrath. He currently resides in Dallas, Texas, where he spends his time making comics, re-watching 80’s television shows, and eating all the tacos.