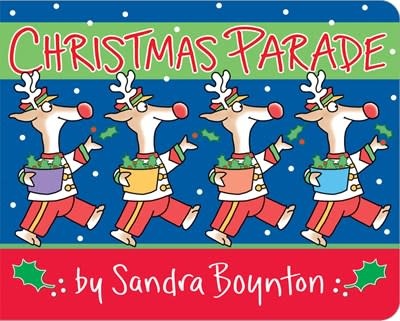 A delightful Christmas board book filled with hilarious characters and dynamic art from the one and only Sandra Boynton!

What’s that noise filling the room?

From this rousing beginning unfolds Christmas Parade, a merry board book from Sandra Boynton.

As the dynamic parade of spiffy and intent musicians marches by, young readers will see animals and their instruments in turn: chickens with bassoons, ducks with trombones, mice with piccolos, cow saxophonists, a tiny bird with a large tuba, a glockenspiel pig, even a Santa rhino with a sack full of presents—all underscored by marching snares (fifteen hippos, one cat) and one booming bass drum (an intrepid elephant).

Written with the irresistible rhythm of a lively marching band and illustrated with Boynton’s signature characters, Christmas Parade is a superb present for young children and families everywhere. Biddy BOOM.