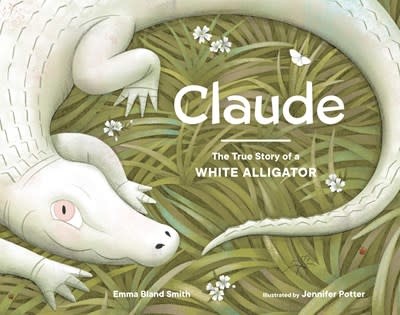 Claude is the story of the California Academy of Sciences’ beloved albino alligator, from his birth in Louisiana to his present day life in his swamp at the Academy.

Claude is a celebrity alligator and the mascot for San Francisco’s California Academy of Sciences. His story started almost 25 years ago in Louisiana, where he hatched out of his egg to discover he looked different from the other hatchlings. They were green and Claude was white. The other hatchings avoided him, and his color made him vulnerable to predators. So Claude went to a special zoo that cared for alligators where he lived in a pen by himself. Now he was safe—but alone.

One day, scientists at the California Academy of Sciences heard about him and asked the zoo if he could come and live in the Academy’s swamp. He made a 2,800 mile journey to his new home, where he had a surprise—he would share his swamp with Bonnie, an alligator who the scientists hoped would be a friend for Claude.

Unfortunately, Bonnie didn’t like Claude’s differences either, so she was moved to another home. But then Claude was alone again—or was he?

With Bonnie gone, Claude began to interact with the five enormous snapping turtles who shared his swamp. The turtles didn’t mind at all that Claude was different! And neither do the millions of people who visit him every year. They know that Claude’s differences are exactly what makes him special.

Claude includes back matter with answers to frequently asked questions about the famous alligator, including information about albinism in animals.

EMMA BLAND SMITH is a librarian and author of children’s fiction and nonfiction. Her picture book debut, Journey: Based on the True Story of OR7, the Most Famous Wolf in the West, won the 2017 Sigurd Olson Nature Writing Award for children’s literature and the 2017 Cook Prize, which honors the best STEM picture book published for children aged eight to ten. Many of Emma’s books feature real-life animals—wolves, dogs, pigs, and alligators. Emma lives in San Francisco with her family, which includes a dog and a cat (but no alligator). Visit her online at EmmaBSmith.com.

JENNIFER POTTER is an illustrator living in San Francisco. When she’s not busy drawing, she loves visiting the city’s many parks and museums with her husband. She has visited Claude many times, and is thrilled he agreed to let her draw him.

JENNIFER POTTER is an illustrator living in San Francisco. When she's not busy drawing, she loves visiting the city's many parks and museums with her husband. She has visited Claude many times, and is thrilled he agreed to let her draw him.