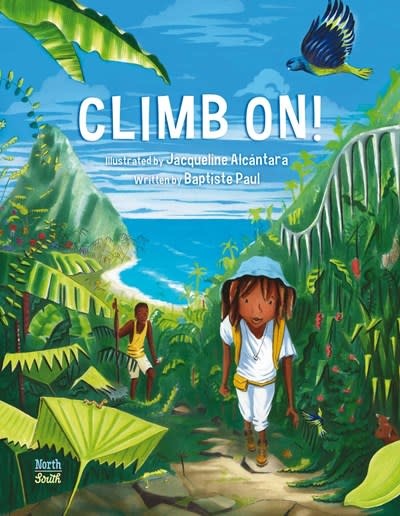 Take a hike with this father-daughter adventure that’s sure to inspire you to get outside.

When a young child reminds her dad about the hike they planned, her father is hesitant —To the tippy top? It’s a great day to watch futbol (soccer). But as the two climb on, her enthusiasm is contagious. Filled with setbacks, surprises, and stunning views, this warm and humorous story highlights in vivid colors the bonding power of a shared experience. A list of creatures at the end prompts a second look for keen-eyed readers to make discoveries of their own.

Baptiste Paul and Jacqueline Alcántara (co-creators of The Field) have teamed up again! Baptiste’s humorous and tender text, with a sprinkling of Creole words straight from the Pitons, and Jacqueline Alcántara’s vibrant and evocative illustrations capture the wonder and emotions experienced on the trail and the special relationship between a parent and a child.

Praise for The Field:

“Vibrant illustrations . . . match the vigor and excitement of the text.” The Horn Book, Starred Review

“Excitement overflows from the pages and the children.” Booklist, Starred Review

Baptiste Paul is a children’s picture book author. His first book for NorthSouth, The Field, received 3 starred reviews and won the Sonia Lynn Sadler Award, was a Junior Library Guild selection, and also appeared on the Horn BookFanfare Best of 2018, the School Library Journal Best of 2018, and the CCBC 2018 Choices lists. Kirkus Reviews calls his new book, Peace (2021), “A visually splendid primer on peace.” Baptiste loves sports, likes to roast his own coffee, and grills. He lives in Wisconsin with his family.

Jacqueline Alcántara is a children’s picture book illustrator. Her debut picture book, The Field, written by Baptiste Paul, received 3 starred reviews and won the Sonia Lynn Sadler Award, was a Junior Library Guild selection, and also appeared on the Horn Book Fanfare Best of 2018, the School Library Journal Best of 2018, and the CCBC 2018 Choices lists. Jacqueline’s favorite days are spent drawing, painting, writing, and walking her dog. She lives in Chicago.