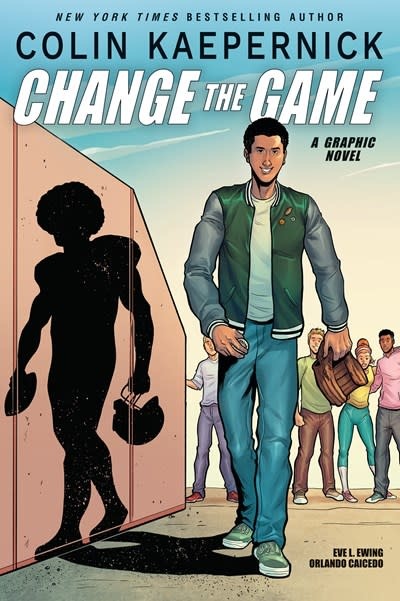 Colin Kaepernick: Change the Game is an inspiring high school graphic novel memoir for readers 12 and up from celebrated athlete and activist Colin Kaepernick.High school star athlete Colin Kaepernick is at a crossroads in life. Heavily scouted by colleges and MLB as a baseball pitcher, he has a bright future ahead of him as a highly touted prospect. Everyone from his parents to his teachers and coaches are in agreement on his future. Colin feels differently.Colin isn’t excited about baseball. In the words of five-time all-star MLB player Adam Jones, “Baseball is a white man’s game.” Colin looks up to athletes like Allen Iverson: talented, hyper-competitive, unapologetically Black, and dominating their sports while staying true to themselves. College football looks a lot more fun than sleeping on hotel room floors in the minor leagues of baseball. But Colin doesn't have a single offer to play football. Yet.This touching graphic novel explores the story of how a young change-maker learned to find himself and never compromise. How the right decision is very rarely the easy one, but taking the road less traveled can make all the difference in the world.

Colin Kaepernick is a Super Bowl quarterback and New York Times and USA Today bestselling author who fights oppression globally. He founded the Know Your Rights Camp, which advances the liberation and well-being of Black and Brown people through education, self-empowerment, mass-mobilization, and the creation of new systems that elevate the next generation of change leaders. In 2019, he started Kaepernick Publishing to empower a new generation of writers and creators through the development and publication of meaningful works of all genres that focus on amplifying diverse views and voices. KaepernickPublishing.com

Colombian artist Orlando Caicedo grew up eating arepas and drawing. After completing his BFA with a concentration in Illustration at the Atlanta College of Art, he decided to do that full-time. He’s the winner of Stan Lee’s POW Entertainment/Webtoon comic contest as well as the Mad Cave Studios talent search. His published work includes Webtoon’s The Badguys and Pound, and Mad Cave Studios’ Dryfoot. He worked in animation before shifting to comics on hit shows such as the Emmy Award winning Archer for FX and Frisky Dingo for Adult Swim. When not drawing comics, he can be found napping with his loving wife and new baby daughter. You can visit him online at www.ocaicedo.com.

Dr. Eve L. Ewing is a sociologist of education and a writer from Chicago. She is the award-winning author of four books: the poetry collections Electric Arches and 1919, the nonfiction work Ghosts in the Schoolyard: Racism and School Closings on Chicago's South Side, and most recently a novel for young readers, Maya and the Robot. She is the co-author (with Nate Marshall) of the play No Blue Memories: The Life of Gwendolyn Brooks. She has written several projects for Marvel Comics, most notably the Ironheart series. Ewing is an assistant professor at the University of Chicago Crown Family School of Social Work, Policy, and Practice. Her work has been published in The New Yorker, The Atlantic, The New York Times, and many other venues. Currently she is working on her next book, Original Sins: The (Mis)education of Black and Native Children and the Construction of American Racism, which will be published by One World.