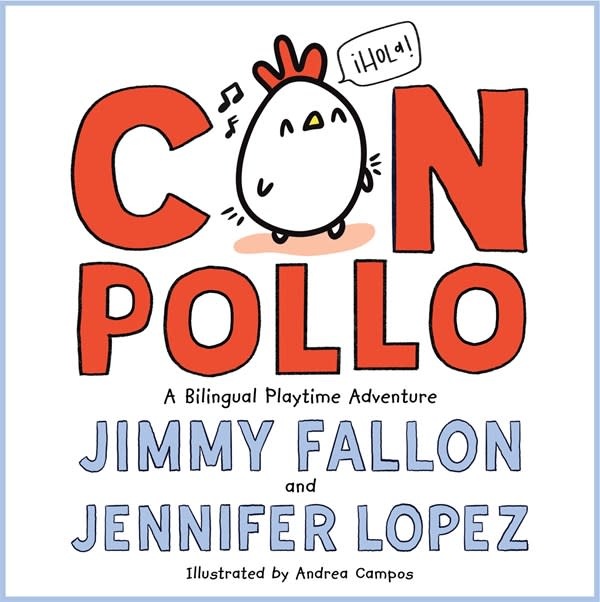 This adorable and hilarious bilingual picture book serves as an engaging introduction to Spanish vocabulary with the help of a plucky chicken named Pollo (and Jimmy Fallon and Jennifer Lopez)!

Pollo makes any activity more fun. Why just go to the beach when you could go to la playa con Pollo?

Do you want to play soccer, or play fútbol con Pollo?

Do you want to go dancing, or bailar con Pollo?

Whatever you decide to do, you're in for a busy, adventurous day with your new friend, Pollo!

Con Pollo: A Bilingual Playtime Adventure is an engaging and hilarious picture book that serves young readers as an introduction to basic Spanish vocabulary, brought to life by superstar team-up Jimmy Fallon and Jennifer Lopez.

Emmy and Grammy Award winner Jimmy Fallon is the author of #1 New York Times-bestselling children’s books Your Baby’s First Word Will Be DADA, Everything Is Mama, This Is Baby, and 5 More Sleeps ‘Til Christmas. He lives in New York with his wife, Nancy, their two daughters, Winnie and Franny, and their dog, Gary.

Jennifer Lopez is an award-winning actress, producer, singer, entertainer, and businesswoman who has helped build billion-dollar brands and has established herself as one of the most influential artists in history, with over 15 billion streams of her music and videos.

Andrea Campos is a Latinx illustrator, author, and photographer based in sunny California who specializes in creating expressive and upbeat work that makes you want to smile. Follow along at @dreasdoodles.