Home » Confessions of a Candy Snatcher 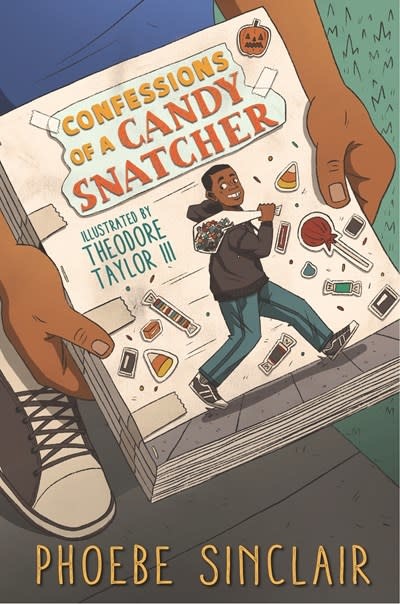 Confessions of a Candy Snatcher

A night of Halloween fun gone wrong has Jonas wondering if he’s really a wolf in disguise in this fast-paced fiction debut delving into accountability, relationships . . . and zines.

For the past few years, twelve-year-old Jonas and his friends have competed to see how many bags of candy they can grab from unsuspecting trick-or-treaters. No one’s supposed to get hurt, just lose their treats. So Jonas is taken by surprise when one of his smaller targets fights back against his snatching attempt. He’s even more surprised when he starts to receive anonymous notes from someone who knows what happened that night. Jonas already has enough on his plate, between his parents’ ill-defined separation and his own guilt—guilt his friend Concepción challenges him to confront in a zine she’s creating around the prompt “What’s the worst thing you ever did?” It’s a complicated question, one that touches on issues of identity, maturity, physical boundaries, and safety. Featuring zines crafted by award-winning illustrator Theodore Taylor III, Phoebe Sinclair’s debut novel relates an emotive, reflective story about the wonder—and mess—of growing up.

Phoebe Sinclair believes in the power of voice. Through writing, organizing, and facilitating, she strives to create space and opportunities for people to listen deeply, speak from the heart, and feel heard. Outside of paid work, she is a wanderer, city cyclist, zinester, and friend who confesses a love for candy corn. Confessions of a Candy Snatcher is her first novel. Jersey-raised, Phoebe Sinclair lives with her partner, a graphic designer and musician, in Jamaica Plain in Boston.

Theodore Taylor III is a front-end web developer by day who maintains a career as a children’s book illustrator in his free time. He is the illustrator of When the Beat Was Born: DJ Kool Herc and the Creation of Hip Hop by Laban Carrick Hill, for which he won the Coretta Scott King John Steptoe New Talent Illustrator Award. His work is inspired by his love of music, comics, animation, video games, street art, and more. He is also a self-proclaimed pizza connoisseur. Theodore Taylor III lives with his wife and son in Richmond, Virginia.