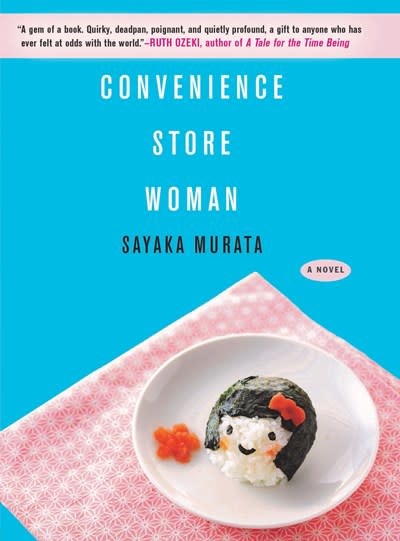 The English-language debut of an exciting young voice in international fiction, selling 660,000 copies in Japan alone, Convenience Store Woman is a bewitching portrayal of contemporary Japan through the eyes of a single woman who fits in to the rigidity of its work culture only too well.

The English-language debut of one of Japan’s most talented contemporary writers, selling over 650,000 copies there, Convenience Store Woman is the heartwarming and surprising story of thirty-six-year-old Tokyo resident Keiko Furukura.

Keiko has never fit in, neither in her family, nor in school, but when at the age of eighteen she begins working at the Hiiromachi branch of “Smile Mart,” she finds peace and purpose in her life. In the store, unlike anywhere else, she understands the rules of social interaction—many are laid out line by line in the store’s manual—and she does her best to copy the dress, mannerisms, and speech of her colleagues, playing the part of a “normal” person excellently, more or less.

Managers come and go, but Keiko stays at the store for eighteen years. It’s almost hard to tell where the store ends and she begins. Keiko is very happy, but the people close to her, from her family to her coworkers, increasingly pressure her to find a husband, and to start a proper career, prompting her to take desperate action…

A brilliant depiction of an unusual psyche and a world hidden from view, Convenience Store Woman is an ironic and sharp-eyed look at contemporary work culture and the pressures to conform, as well as a charming and completely fresh portrait of an unforgettable heroine.